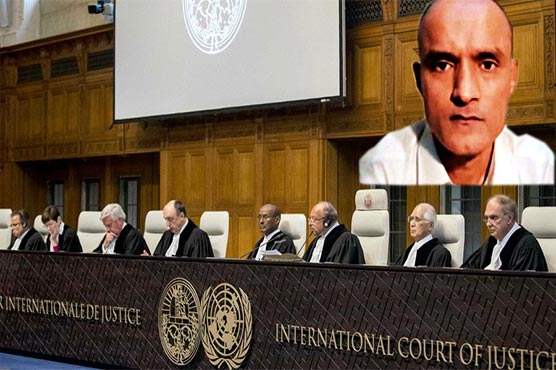 THE HAGUE: The International Court of Justice (ICJ) will announce its verdict in Kulbhushan Yadav case on Wednesday (tomorrow).
Pakistani team headed by the attorney general has reached The Hague to hear the verdict. The team also includes foreign office Spokesperson Dr Muhammad Faisal.
According to official sources, the verdict will be announced at 3:00 pm, as per Netherlands time.
Kulbhushan Jadhav, who is currently in the custody of Pakistan’s Law Enforcing Agencies (LEAs), has been accused of charges pertaining to espionage which are punishable by death under the law of the land.
Pakistan on Feb 15 released a fact sheet just before the hearing of Kulbhushan Jadhav’s case at ICJ in The Hague.
Pakistan has presented evidence obtained from Commander Jadhav after his arrest and during the criminal process leading to his conviction as amply demonstrating his activities in fomenting terrorism and engaging in espionage in Pakistan.
Pakistani security agencies on March 24, 2016, apprehended an ‘on-duty RAW agent’ from Balochistan. The suspect was said to be an officer of the Indian navy working for the covert agency to destabilize Pakistan.
The operative had contacts with banned organizations and was working on plans to break Karachi and Balochistan away from Pakistan and to sabotage the billion dollar China-Pakistan Economic Corridor (CPEC) project.
On March 25, a day after the arrest, the Indian Ministry of External Affairs said the Indian man arrested from Balochistan has no connection with the government, however, admitted that Kulbhushan Yadav is a former officer of the Indian navy.