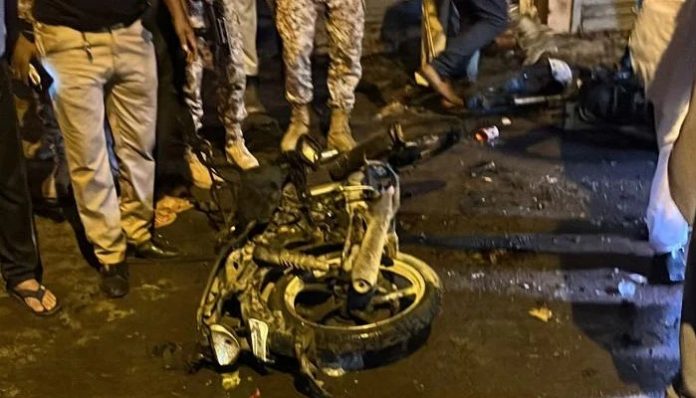 KARACHI: A woman was killed and around a dozen people, including three police officials, were left injured after an improvised explosive device (IED) was used to trigger a blast in Karachi’s crowded Bolton Market in Kharadar on Monday night.

In a statement, Karachi police confirmed that a police vehicle was the target of the IED blast, adding that Assistant Sub-inspector Badaruddin was among the injured.

They said three policemen sustained injuries. All the injured have been shifted to a hospital, while an emergency has been imposed across all public healthcare facilities in the city.

The sound of the blast could be heard in far-off areas, while people present at the site of the incident started running here and there in a state of panic.

The fire brigade reached the site of the incident and doused the flame. According to hospital sources, 11 people, including one child and the police official, were currently under treatment.

Prime Minister Shehbaz Sharif condemned the incident and expressed his sorrow upon the demise of a woman in the blast. He also showed sympathy towards all those injured in the explosion and directed the authorities concerned to arrest the perpetrators involved in the crime as soon as possible.

PM Shehbaz further assured the Sindh government of complete assistance from the Centre and ordered enhancing the security situation across the country.

Chief Minister Punjab Hamza Shahbaz also condemned the incident and prayed for the early recovery of the people injured in the blast.

“Only through unity and consensus can we stop such incidents […] the enemy is conspiring to create instability in the country,” the chief minister said in a statement.

To foil the attacks, the chief minister said officials would have to think beyond politics and in the interests of the nation.

MQM-P Rabta Committee condemned the incident and expressed solidarity with the families of the victims.

“Increasing terrorist incidents are alarming […] law enforcement agencies (LEAs) should deal with terrorists with an iron fist,” the body added.