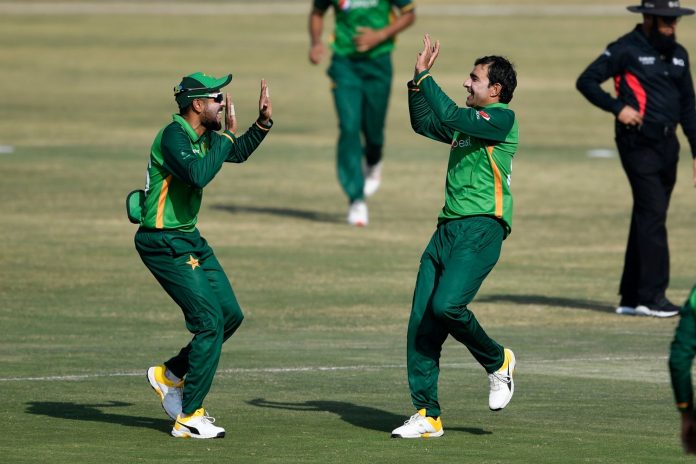 RAWALPINDI: Pakistan won second consecutive One-day against Zimbabwe on Sunday, defeating them by six wickets at the Rawalpindi Cricket Stadium, Khyber News reported. Chasing target of 207, Pakistan wrapped up the game in 35.1 overs with Captain Babar Azam hitting a huge six. He scored an unbeaten 77 from 74 balls with seven fours and two sixes. Opener Imam-ul-Haq made 49 and along with his partner Abid Ali (22) provided a solid start of 68 runs. Later, 20-year-old debutant Haider Ali played a confident Innings of 24-ball 29. Mohammad Rizwan could score only one run while Iftikhar Ahmed, giving good support to Babar, made 16 and remained not out.

Earlier, Zimbabwe were restricted to 206 due to Pakistani allrounder Iftikhar Ahmed’s excellent bowling performance. Zimbabwe chose to bat first after captain Chamu Chibhabha won the toss but they were bowled out for 206 in 45.1 overs. Iftikhar displayed his career-best bowling performance with five for 40 in the 10-over quota in his sixth ODI match. Fast bowler Mohammad Musa, another 20-year-old debutant, claimed two wickets for 21 runs.

Sunday’s match is a milestone 210th ODI for Pakistani umpire Aleem Dar, beating the world record of 209 he held jointly with South Africa’s Rudi Koertzen. Aleem already holds the records for officiating in the most Test matches (132) and the most international matches (387) of any umpire.