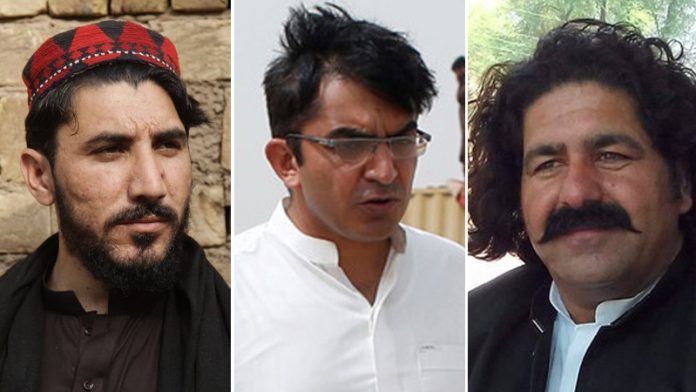 ISLAMABAD: Islamabad High Court (IHC) has once again summoned responses from Pashtun Tahafuz Movemnet (PTM) chief Manzoor Pashteen, MNAs Mohsin Dawar and Ali Wazir in a case pertaining to maligning state institutions.
The court on Monday also issued notices to the interior secretary, defence secretary, law secretary, Pakistan Electronic Media Regulatory Authority (Pemra) and Pakistan Telecommunication Authority (PTA) for a second time.
Justice Amir Farooq of IHC directed the director general of internet protocol to personally appear before the court.
In last hearing, Barrister Shoaib had pleaded the court to pass ruling to ban PTM leaders’ social media accounts and slap ban on the party as it is not registered and involved in creating anti-state sentiments in the country.
A petition was filed in Islamabad High Court against PTM for speaking against national institutes including Pakistan Army in the wake of 10-year-old Farishta Mohmand rape case in the federal capital.