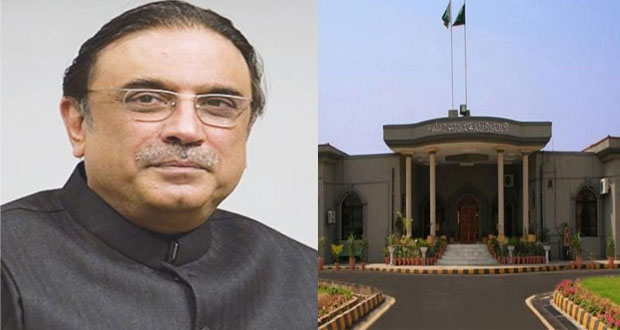 ISLAMABAD: The Islamabad High Court Chief Justice Athar Minallah on Tuesday asked PTI leaders seeking disqualification of Pakistan People’s Party co-chairman Asif Ali Zardari to convince the court that the matter was of public interest and as to why it should address it on a priority basis.
PTI leader Usman Dar and Khurram Sher Zaman had approached the court with petitions against former president of Pakistan.
The IHC Chief Justice observed that political cases should be settled at a political forum.
“Why do you bring political cases to court, your case is related to Election Commission. Political fights should be fought at a political forums or the parliament,” the Chief Justice told the petitioners.
Usman Dar’s lawyer told the court the case was about disqualification under Article 62 (1)(f), which has been filed on the basis of verified documents.
The chief justice told the court that the complainant could also have contacted an investigation agency.
He also asked the lawyer whether he was aware of the backlog of cases.
“Why should we hear this political case instead of pending cases. Countless people are in jails and we have to look into their cases”.
Chief Justice Athar Minallah remarked that parliament should be strengthened.
The lawyer said Election Commission was not the relevant forum to approach in a disqualification case under Article 62 (1)(f) as the Sindh High Court had already ruled in this regard.
The PTI leaders have maintained in their application that Zardari is no longer Sadiq and Ameen for hiding his assets and the court should declare him disqualified as National Assembly member.