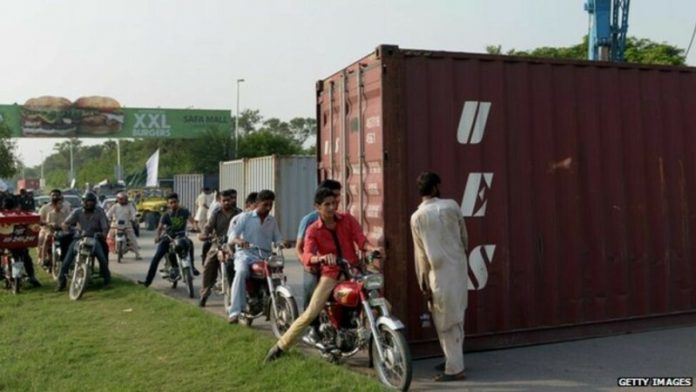 ISLAMABAD— Islamabad High Court Bar Association (IHCBA) approached the Supreme Court of Pakistan against the closure of roads and highways and arrest of political workers ahead of the PTI’s long march.

The bar association has moved to the court on Tuesday following the blockade of roads and highways in different parts of the country to stop the marchers reaching the federal capital.

The instant Constitution petition has been filed by IHCBA President Muhammad Shoaib Shaheen. Secretary interior ministry and secretaries of all four provinces have been made respondents.

The petition read that the roads and highways were being blocked by different state institutions and executive authorities to prevent people from reaching their destinations.

IHCBA president said all the protestors are also bound to not disturb or violate the fundamental rights of other citizens and abide by the provisions of the Constitution while avoiding deterioration of law and order situation.

The petition also highlighted the arrest and harassment of the political workers and activists without any lawful justification, deeming it to be illegal and contrary to the Constitution.

The petitioner requested the court to order the authorities to unblock roads and highways and not to create hindrances in the movement of the citizens in any part of the country.

PTI Chairman Imran Khan, in a press conference, also criticized the government for closure of roads crackdown against party workers, and asked the judiciary to intervene as the nation is looking up to it for action after the use of power by the government despite they have assured of staying peaceful.