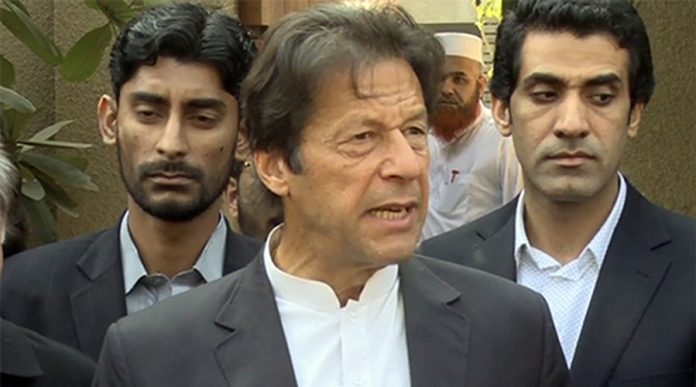 ISLAMABAD: A two-judge bench of the Islamabad High Court (IHC) seized with the hearing of a petition seeking disqualification of Pakistan Tehreek-e-Insaf (PTI) chief Imran Khan was dissolved on Wednesday.
The division bench comprising – Justice Amir Farooq and Justice Miangul Hassan Aurangzeb – was hearing the petition filed by Abdul Wahab Baloch, secretary general of the Pakistan Justice and Democratic Party, seeking disqualification of the likely prime minister under Article 62 of the Constitution over the Sita White case.
The bench dissolved after the petitioner raised objection on its composition and the matter was referred to the IHC chief justice to constitute another bench to take up the case.
Addressing the petitioner, Justice Farooq asked if he didn’t repose trust in the bench. At this, Mr Baloch said he has trust in the bench but he wants senior judges to hear his case.
The petitioner argued that Mr. Khan didn’t disclose details about his alleged daughter Tyrian from Sita White in his nomination papers for the 2018 general elections.
He, therefore, doesn’t fulfill the requirement of Article 62 and 63 of the Constitution and is ineligible to be a member of Parliament.
It is pertinent to mention here that the petitioner had challenged the PTI chief’s candidature at different forums before the elections which concluded last week, but his legal challenges were rejected.
In an interview, former Chief Justice of Pakistan Iftikhar Muhammad Chaudhary, who is now the president of the Pakistan Justice and Democratic Party, had claimed that he has evidence to show that Khan has admitted to being the father of Tyrian White while abroad, but denies the same in Pakistan.