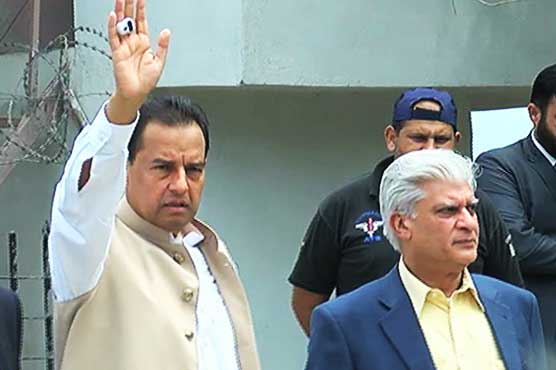 ISLAMABAD: The Islamabad High Court (IHC) here Monday rejected appeal of National Accountability Bureau against the accountability court order of granting bail to Captain (retd) Muhammad Safdar.
A division bench of the IHC had reserved its judgment on Dec 14 in the petition of NAB, seeking judicial custody of Captain Safdar, and revoking of his release on post-arrest bail.
Safdar is facing corruption trial along with other Sharif family members including ousted prime minister Nawaz Sharif following Supreme Court verdict in Panama Papers case.
The IHC bench comprising Justice Aamer Farooq and Justice Mohsin Akhtar Kayani reserved the judgment which was announced today.
The accountability court on Sept 14 had summoned him to appear before the court for Sept 19. After Safdar did not appear, the court again summoned him for Sept 26 and even then he did not appear.
On Oct 2, the court issued non-bailable arrest warrants for him. On Oct 8, NAB arrested the accused from airport and produced him before the court. The court, instead of remanding him in NAB custody, released him on bail against Rs5 million surety bonds, which is unlawful. NAB contended that the accountability court had no powers to grant bail to the accused under Section 9(b) of the National Accountability Ordinance (NAO) 1999.