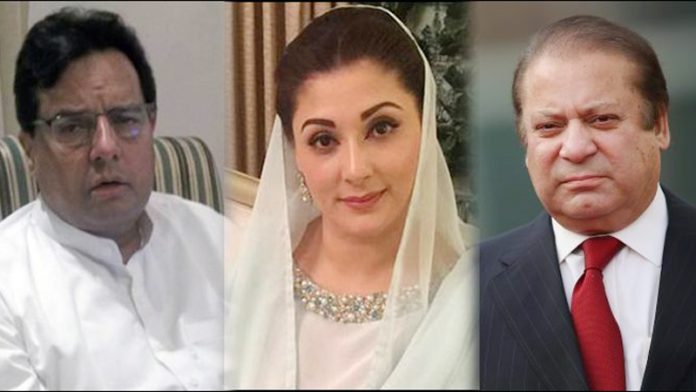 ISLAMABAD: The Islamabad High Court (IHC) will announce its verdict today on pleas filed by former premier Nawaz Sharif, his daughter Maryam Nawaz and son-in-law Captain (retd) Muhammad Safdar challenging the Avenfield verdict against them.
A two-judge bench comprising Justice Athar Minallah and Justice Miangul Hassan Aurangzeb is hearing the petitions filed by former premier Nawaz Sharif, his daughter Maryam Nawaz and son-in-law Capt (retd) Safdar.
National Accountability Bureau (NAB) prosecutor Akram Qureshi concluded his arguments in the case. During Tuesday’s hearing, the bench had directed Qureshi to conclude his arguments within 30 minutes and said that a verdict will be announced today even if arguments are not concluded.
Accused claimed they bought London flats with 12 million Dirhams that were invested: NAB prosecutor
As the hearing began, the NAB prosecutor argued over the sale of Gulf Steel Mills.
“In the case, the unique point is that the Gulf Steel Mills was sold in 1978,” Qureshi said while presenting records of various court judgments.
“According to the accused, the sale agreement was between Tariq Shafi and Mohammad Abdullah Kayed Ahli,” he added. “This stance was adopted in petitions submitted before the Supreme Court.”
To this, Justice Aurangzeb, “Was this the stance of the accused?” The NAB prosecutor responded in the affirmative.
“They said that a further 25 per cent shares were sold in 1980,” Qureshi added. “How did they receive the 12 million Dirhams that were paid for the mill?”
Qureshi continued, “The petitioners stated that they invested 12 million Dirhams in Qatari prince’s business and presented the settlement as money trail for Avenfield apartments. According to them, the basis of money for the purchase of the London flats was these 12 million Dirhams but during investigation it was found that the settlement agreement presented was fake and there is no such record of it in the Dubai records,” he added.
“The Dubai government has said they have no record of the sale of 25 per cent shares,” he asserted.
Qureshi further said, “Maryam Nawaz through a different plea in the Supreme Court adopted the stance and through CMA No. 7531 she submitted documents in the top court which mentioned business matters with the Qatari family.”
Big difference between JIT and NAB: Justice Aurangzeb
“The same stance was adopted before us that the money for the purchase of London flats was received through the sale of Gulf Steel Mills,” Qureshi added.
To this, Justice Aurangzeb asked, “What do you mean before us? The accused were never presented.”
In response, Qureshi said, “This was their stance before the JIT.” However, Justice Aurangzeb pointed out, “You are not the JIT, there is a big difference between NAB and JIT.”
Qureshi then said, “A fake sale deed was made to hide that Maryam Nawaz is the owner.” He was then asked by Justice Aurangzeb, “You are saying that Nawaz made the papers in Maryam’s name?”
Replying in the affirmative, the NAB prosecutor said, “Yes, Nawaz is the real owner of the flats.”
To this, Justice Minallah asked Qureshi to present “some evidence” in this regard. “How can we assume that after such an extensive investigation there can be no link found of Nawaz’s relation with the flats,” he said.
“There is no evidence showing Nawaz as owner,” Justice Minallah asserted.
Responding to the judge, the NAB prosecutor said, “Till 2012, Maryam was the beneficial owner of these flats and then became a trustee through a fake trust deed.”