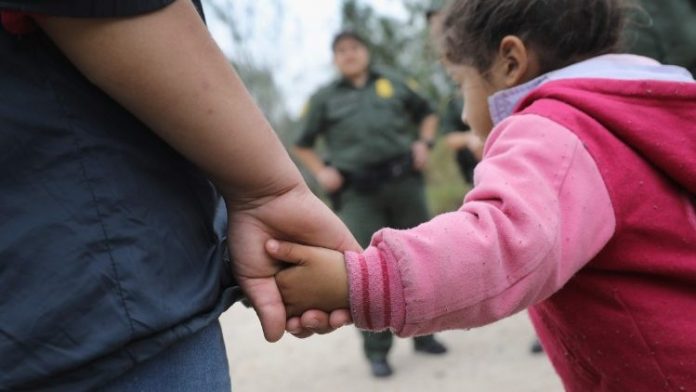 WASHINGTON: Parents who cross illegally from Mexico to the United States with their children will not face prosecution for the time being because the government is running short of space to house them, officials said on Monday.
President Donald Trump´s administration has vowed to prosecute all adults who cross the border illegally but its policy of separating immigrant children from parents met fierce international criticism so it is now trying to keep detained families together while the parents await trial.
That has created logistics problems of how to house those families, and the Customs and Border Protection agency is now not referring new cases for prosecution, CBP officials said.
White House spokeswoman Sarah Sanders said the administration was not dropping its policy of “zero-tolerance” of illegal immigration but it needed a “temporary solution” until it can house migrant families.
“This will only last a short amount of time, because we’re going to run out of space, we´re going to run out of resources in order to keep people together. And we´re asking Congress to provide those resources and do their job,” Sanders told reporters.
A source at the CBP said it expects to soon resume the referrals for prosecution and is still sending for prosecution those adults who are caught crossing illegally and do not have children with them.
Trump faced a global outcry this month, including sharp criticism from some inside his Republican Party, over migrant children being separated from their parents.
He formally ended the policy of separating families last Wednesday, but the administration has yet to reunite more than 2,000 children with their parents and it is not clear how it will house thousands of families while parents are prosecuted.
The U.S. military has been asked to prepare to house up to 20,000 unaccompanied child migrants on its bases.
Although Republicans control both chambers in Congress, disagreements between moderates and conservatives in the party over immigration matters have hit prospects for a speedy legislative fix to the border crisis.
Mark Meadows, leader of a conservative faction among Republicans in the House of Representatives, said on Monday he expected that an immigration bill being worked on by Republicans would fail.
A group of Republican and Democratic senators huddled late on Monday to see whether they might be able to come together on legislation establishing a protocol for treating immigrant families as their pleas for asylum or other protections from deportation are considered.
But after the meeting, Senator Dianne Feinstein, the senior Democrat on the Senate Judiciary Committee, said “Nothing’s going to happen this week,” on legislation in the Senate.
With Congress out of session next week for the July 4 public holiday, that would mean the Senate could not debate a bill until at least the following week.