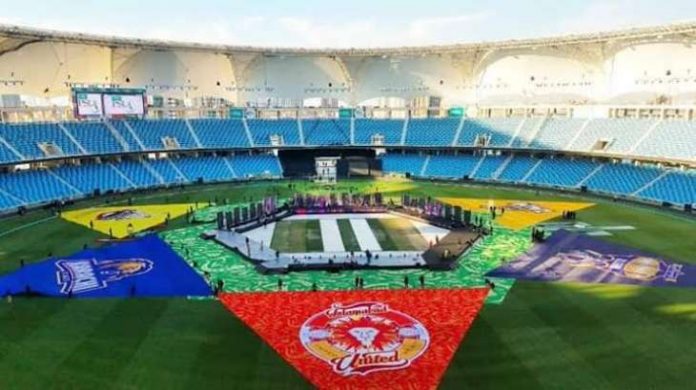 KARACHI: An impressive and glittering closing ceremony was held ahead of Pakistan Super League (PSL) final at National Stadium in Karachi. The ceremony started at 6pm before the toss took place at 7:30pm and the first ball will be bowled at 8pm.
Fans can’t wait for the Pakistan Super League (PSL) final between Quetta Gladiators and Peshawar Zalmi, the two best teams of the tournament.
The ceremony was kicked off with the address of Pakistan Cricket Board Chairman Ehsan Mani and Sindh Chief Minister Murad Ali Shah.
The ceremony began with a one minute silence to honour the martyrs of Christchurch terror attack. Sindh Chief Minister Shah called the successful PSL matches as a victory for the people of the city.
“We held final last year. this year we held seven matches. I wish international cricket returns home it starts from Karachi,” he said.
The leading performers who displayed their talent include Abrar-ul-Haq, Aima Baig, Shuja Haider, Fawad Khan, Young Desi with the final performance of the ceremony by the heart-throb Junoon.
The ceremony was hosted by one of the most popular anchors and singers, Karachi’s very own Fakhar-e-Alam.
Spain’s football star Carles Puyol the special guest at the closing ceremony appreciated the welcome given by the country. The Barcelona central defender earned 100 international caps and won the Euro 2008 and FIFA World Cup 2010.
“Salam Pakistan. I am very happy to be here. It’s my first time here and I am enjoying it a lot. I thought Pakistanis only liked cricket but I have seen they like football a lot also which has made me happy,” he said,
The highlight of the event was the evergreen Junoon hitting the stage. Ali Azmat with powerful vocals and Salman Ahmed on guitar entertained the thousands present in the stadium.
The PCB has also planned a spectacular fireworks display, which will start after the final ends.