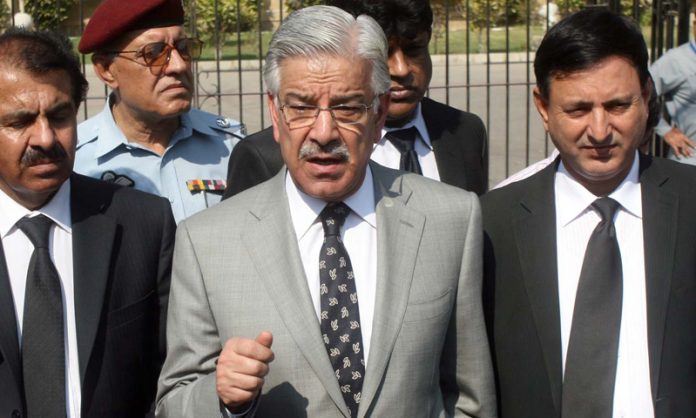 SIALKOT: Minister for Foreign Affairs Khawaja Muhammad Asif on Saturday said the prevailing political scenario in country is bringing to light the real faces of politicians and exposing their personal designs.
He was talking to the media after inaugurating the newly established Executive Passport Office here.
He strongly criticised the politics of conflict and confrontation of Pakistan Tehreek-e-Insaf (PTI) and Sheikh Rashid Ahmed.
The minister said PTI Chairman Imran Khan ‘sacrificed’ the politics of 12 newly elected Senators of his party by handing them over to Pakistan People’s Party.
He said it seemed that Imran Khan could go to any extent to gain power. He advised that now Inran Khan should give up day-dreaming of becoming prime minister.
Asif said PPP Co-Chairman Asif Ali Zardari was apparently working on his self-designed policy of ignoring party’s old workers.
It seemed that Asif Zardari wanted to remove PPP’s old workers including Raza Rabbani from the PPP scene, he added.
The minister said that the incumbent government is the government of Nawaz Sharif’s workers.
On Syrian war, the foreign minister said the Pakistani government and nation were fully supporting the oppressed people of Syria. They strongly condemn murder of thousands of innocent Syrian people, he added .
He called for immediate halt to the prolonged war in Syria, saying Parliament will discuss and deliberate its foreign policy about Syria on Monday. – APP