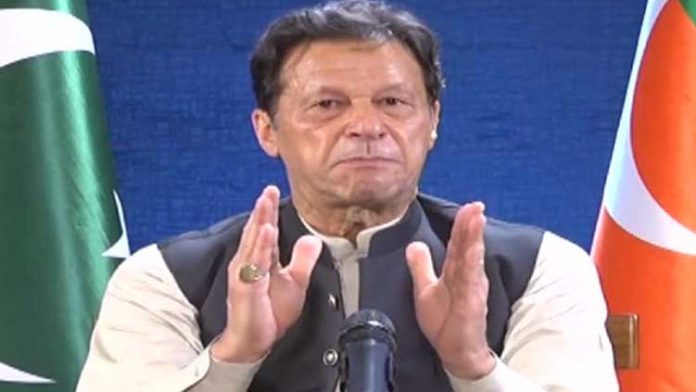 ISLAMABAD: Imran Khan, Chairman Pakistan Tehreek-e-Insaf (PTI) and a former prime minister, claimed that efforts are underway to knock him out of politics in the wake of prohibited funding case.

Talking to the people via a live telecast from his Bani Gala residence in Islamabad on Wednesday, Imran Khan said that every effort was made to crush PTI and knock him out of politics but ‘we did not sit silently’. Former prime minister claimed that the regime change plot was still in progress.

He termed the foreign funding case as a tool to disintegrate PTI and said that the case had no value which would be established when any court would peruse the decision.

He said that efforts to drive a wedge between Pakistan’s biggest political party, PTI, and Pakistan Army were being done deliberately.

In his address, the former prime minister said that during his government, the Indian media and their local allies attacked the civil-military relationship and portrayed him as a prime minister installed by the army.

After the Mumbai attacks, he said that Asif Ali Zardari and Nawaz Sharif spoke out against Pakistan’s interests. He also brought up Nawaz Sharif’s secret meetings with Indian businesspeople.

He added that he Zardari had proposed sending DG ISI to India in the wake of the Mumbai attacks. He claimed that it was Zardari who sent a message to the US via ex-ambassador Husain Haqqani to save him from the Pakistan Army.

The ex-PM said that it could be read in the Dawn leaks what Nawaz Sharif opined about the Pakistan Army.

“Now, the impression is being created that they [opponents] are patriotic and we [PTI] are anti-military.”

Imran Khan warned the nation that the next phase of regime change conspiracy would be strict as the local abettors have decided to show muscles to crush and intimidate people.

He said that the foreign powers do not want to see a stable Pakistan and mentioned speculations that Pakistan’s airspace was used for a drone attack in Afghanistan killing al-Qaeda leader Ayman al-Zawahiri.

If we are doing it, he added, it would not benefit Pakistan which was evident from experiences.

The ex-PM expressed grave concerns about the rise of Tehreek-i-Taliban Pakistan (TTP) in Swat and adjoining areas. He said that PTI leaders have started receiving threats from TTP militants, adding that to him; it seemed like another conspiracy to weaken PTI.

He deplored how PTI leader Shahbaz Gill was arrested and played clips of Nawaz Sharif, Maryam Nawaz, Asif Ali Zardari, and others speaking against the military’s leadership.

He asked why no action was taken against these leaders who spoke against top military leadership and said that Shahbaz Gill should have been allowed to clarify himself before the court if he had said something wrong.

The ex-PM said that PTI has street power to block the entire country, but they would not resort to it but instead stage peaceful protests just because they care about the country.