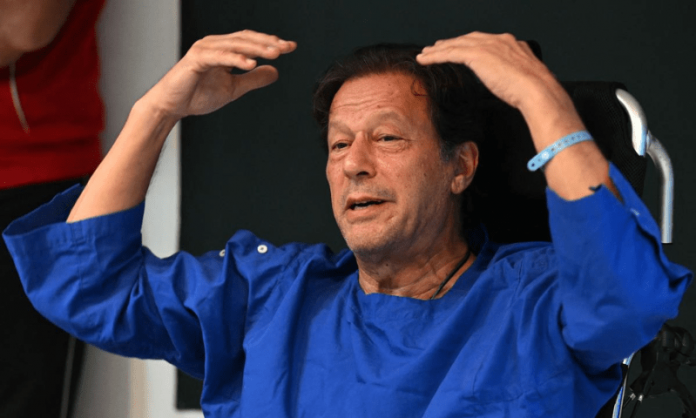 ISLAMABAD: In a congratulatory message to the newly appointed military leaders, including army chief Asim Munir, Pakistan Tehreek-e-Insaf Chairman Imran Khan expressed hope that they will work to end the prevailing trust deficit that has built up in last 8 months between the state and the nation.

In his twitter post, former prime minister Imran Khan congratulated newly appointed Army Chief General Syed Asim Munir, and Chairman Joint Chiefs of Staff Committee General Sahir Shamshad Mirza “We hope new mly ldrship will work to end prevailing trust deficit that has built up in last 8 months between the nation and the State. Strength of the State is derived from its people,” Imran Khan said.

Quoting Pakistan’s founder Mohammad Ali Jinnah in his tweet, Imran Khan said, “Do not forget that the armed forces are the servants of the people and you do not make national policy; it is we, the civilians, who decide these issues and it is your duty to carry out these tasks with which you are entrusted.”

Congratulations to Gen Sahir Shamshad Mirza as new CJCSC & Gen Syed Asim Munir as new COAS. We hope new mly ldrship will work to end prevailing trust deficit that has built up in last 8 months between the nation and the State. Strength of the State is derived from its people. pic.twitter.com/5k4fVA2UGb

Ousted prime minister has repeatedly accused the army leadership of being involved in the persecution of the PTI leadership, while casting aspersions on the army’s claim of neutrality.

Ever since his ouster in a vote of no confidence in April, he has called for early elections while urging the army to play its role by supporting ‘truth’ and ousting his rivals who he has repeatedly accused of corruption. This has come while Imran himself is embroiled in multiple cases, including one regarding selling off gifts that he had received on official trips during his tenure as prime minister, and selling them off at profits. Another case pertains to his party receiving funding from proscribed sources.

Another issue was the appointment of the army chief, which took place a day earlier, with Imran claiming that the ‘corrupt cabal’ (referring to the PDM leadership of PM Shehbaz Sharif, PPP Co-chairman Asif Zardari and JUI-F chief Fazlur Rehman) shouldn’t decide who will be the next army chief. The PDM in turn accused him of marching on Islamabad to get a ‘favorable’ chief appointed.

His latest move is that the PTI will quit all assemblies, including in the provinces of Khyber Pakhtunkhwa and Punjab where the party is in power. It was later clarified that the party hopes to dissolve these assemblies. The aim is to bring the situation to a point where the incumbent government has to announce early elections or order by-elections on all the seats from which PTI lawmakers and their allies stepped down. One other outcome could be general elections for the Punjab and KP Assembly, which would then start their terms from the date of the election. The general election for the National Assembly and the remaining provincial assemblies and units would, in that case, take place in October 2023 as planned.