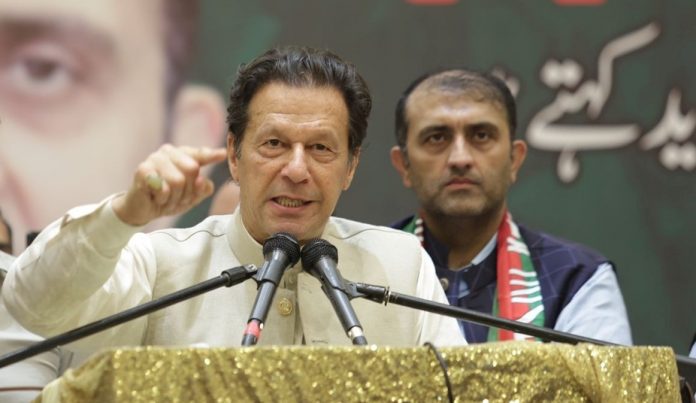 ISLAMABAD: Imran Khan, Chairman Pakistan Tehreek-i-Insaf (PTI), on Wednesday said that the imported government had already doubled the prices of items of essential use, and they would increase further in days to come.

Addressing PTI workers’ convention here, former prime minister reiterated that he was ousted from the office as a result of foreign conspiracy but the imported government failed to deliver. He said that PTI to hold a historic rally in the capital on Saturday against the imposed government.

He also claimed that Hamza Shehbaz would cease to be the Punjab chief minister.

The PTI chairman said that the so-called ‘impartial’ Election Commission of Pakistan (ECP) had been exposed.

He alleged that the Punjab government was taking measures to rig the upcoming by-polls in the province. “The Pakistan Muslim League-Nawaz (PML-N) government will not stay here for good. But I ask all the provincial government officials not to do something ‘illegal’ because faces of all the police officers, who had ordered a crackdown on the PTI’s men, women and children during the party’s long march towards Islamabad on May 25, remain etched in our memories,” he warned.

The Pakistan Tehreek-i-Insaf (PTI) leaders on Wednesday delivered a message, although covertly, to the authorities that they should not consider their party weak and refrain from taking such steps which could force them to form PTI’s militant wing, reported 24NewsHD TV channel.

“After all, what do you want to achieve by sidelining the PTI?” questioned Fawad Chaudhry during a press conference he addressed along with other party leaders in Islamabad.

“Truth of the matter is that right now the constitution lies suspended in the country,” Fawad said, adding, “Since May 25, 2022, the day when the PTI workers had set out on a long march towards Islamabad, there is a martial law in the country.”

The PTI leader said that Faisal Vawda had filed a reference in the Supreme Court (SC) against one of the members of the ECP. “But the apex court has still not taken it up for the hearing,” he lamented.

Similarly, he reminded that President Arif Alvi had written a letter to the Chief Justice of Pakistan (CJP) Justice Umar Ata Bandial in which he had asked for the constitution of a commission to probe the lettergate scandal, but there was no action on the part of the SC either.

He went on to add that the PTI was going to issue notices to the party’s ‘deserters’ right now sitting in the National Assembly not to vote for the money bill (budget) presented by the government. “And we are quite hopeful that the imported government will not be able to get the national budget passed,” he added.

Shireen Mazari regretted that despite clear instructions by the Lahore High Court (LHC) to the Election Commission of Pakistan (ECP) to notify five reserved seats of the PTI in the Punjab Assembly (PA), the latter had not budged from its position at all. “This is a clear case of contempt of court,” she said it aloud.