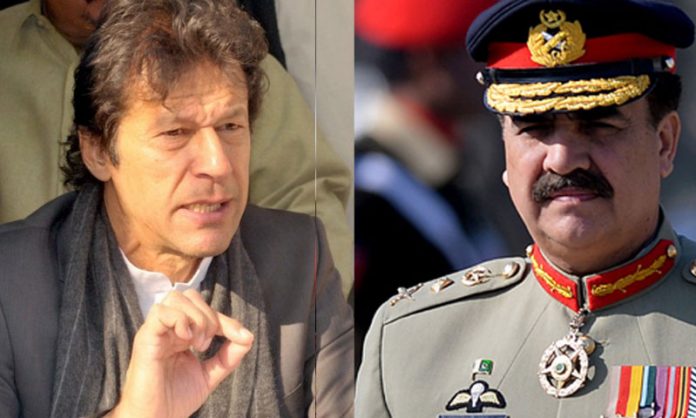 MARDAN: Chairman Pakistan Tehrik-e-Insaf (PTI) Imran Khan met Chief of Army Staff (COAS) General Raheel Sharif in Punjab Regiment Mardan and discussed security situation in Khyber Pakhtunkhwa and border areas following the terrorists’ attacks in the province.
The meeting took place near a helipad in Mardan. Khyber Pakhtunkhwa Chief Minister Pervez Khattak and other provincial officials accompanied Imran Khan.
The army chief and PTI chairman separately arrived in the city after the terrorist incident and expressed sorrow over loss of precious lives. The COAS also attended funeral prayer of the deceased persons.
Talking to media in Mardan, Imran Khan confirmed his meeting with the Army Chief. He vowed to stand together with the brave people of the province. He resolved that the fight against terrorists will continue till complete elimination of terrorists.
Imran Khan condemned the terror strike in Mardan and said militants’ are foreign funded and disrupting peace in Pakistan. He said it was need of the hour to mobilize Foreign Ministry and present Pakistan’s message to the world in suitable manner.
Earlier in the day, Gen Sharif had appreciated army, Frontier Corps and police for prompt and effective response and defeating the terrorists attempt in Peshawar’s Christian colony.
Security forces killed all the four terrorists who entered Christian colony near Warsak road in Peshawar on Friday morning.
According to the Inter-Services Public Relations (ISPR), two FC personnel, a police constable and two civilian guards were injured in the exchange of fire with the terrorists.