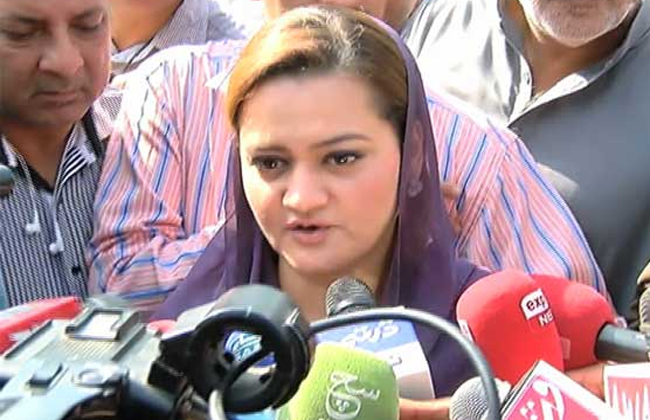 ISLAMABAD: Pakistan Muslim League-Nawaz (PML-N) spokesperson Marriyum Aurangzeb on Friday has criticized Prime Minister Imran Khan and said that he wants to weak the Parliament with his ineffective policies.
Talking to media, Marriyum Aurangzeb said that the premier gives examples of cricket but he is not even allowing his opposition to play the game.
PML-N leaders are facing jail terms fromseveral months, however, not a single charge of corruption has been proven against them, she added.
Earlier, the PML-N spokesperson had asked PM Imran to personally appear before the Election Commission of Pakistan (ECP) in the foreign funding case against his party.
“Imran sahab, if you haven’t stolen [any assets], then appear personally in foreign funding case address the nation and declare assets of your family, wife and yourself,” she said.
“It is teesra (third) Pakistan for you, whereas for others, it is naya (new) Pakistan? How much tax do you pay? How much tax have your children and wives paid? How much assets and properties you own?” she questioned, while asking the premier to make it known to the public in a tweet.
“Mr Imran, why you haven’t declared foreign bank accounts in the name of your children and wives?” she asked further.
“You are living in a glass house and ‘throwing stones’ of accusations against others let your 23 bank accounts be scrutinised,” she went on to say.
“The one, who has searched three generations of political rivals, is escaping from scrutiny of himself,” she added.