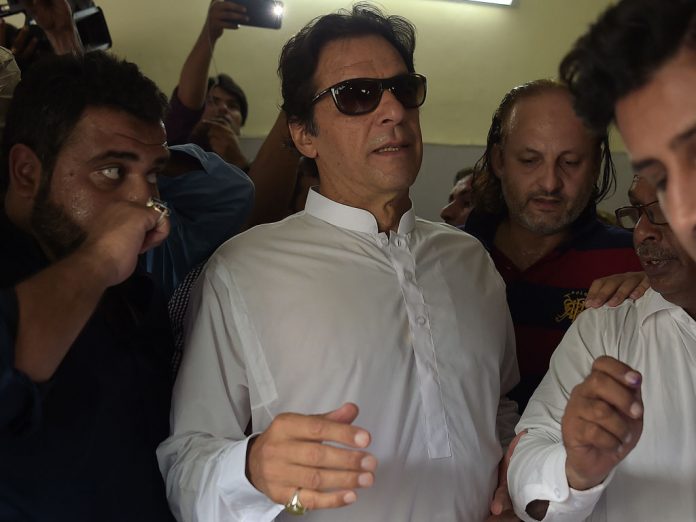 ISLAMABAD: Chairman Pakistan Tehreek-e-Insaf (PTI) Imran Khan has said that the PTI government would introduce Khyber Pakhtunkhwa like police reforms in Punjab, adding that he would nominate young and experienced chief minister for Punjab.
He was addressing PTI’s newly elected members of Punjab Assembly here at local hotel on Wednesday. He said that the PTI government would provide relief to the people Punjab, who were passing through poverty since decades. He said that there were many challenges in Punjab, promising to improve the schools and hospitals in promises. He said that the real fight would be in Punajb. He said that Naya Pakistan would start from Punjab.
Imran Khan told the party members that he would demand the things which he would not follow himself, adding that the government would save the public money and spent them on people’s welfare. He also promised to take all decision on merit and in national interests. He said that he had promised with the people to make Pakistan as Madina state.
He said that a young MPA would be nominated for the post of chief minister, who would have clean history. He said that you and experience team would be announced for Punjab. However, he did not disclose the names of the chief minister and his team.
Meanwhile, Pakistan Tehreek-e-Insaf spokesperson Naeem-ul-Haque said Imran Khan would live at the chief minister annexe of the Punjab House after taking oath as the prime minister.
Haque told media during his visit to Punjab House that Imran would at the annexe during the week and go to his personal residence over the weekends.
Commenting on the major opposition parties that are protesting in the federal capital, Haque said the PTI-led government was ready to cooperate if the protestors wanted to resolve the matter.
“The system installed by Election Commission of Pakistan is exceedingly faulty and requires to be overhauled,” he said. “We will improve the system so the future elections can be conducted with ease and nobody gets a chance to complain.”
“We are not opposed to re-tabulation in NA-131,” he said. “Five members of our party were ready for a recount. The issue of four other constituencies will also be resolved by tomorrow.”