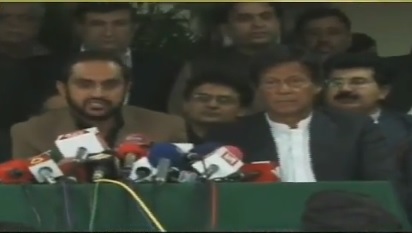 ISLAMABAD: Pakistan Tehreek-e-Insaf (PTI) chief Imran Khan has on Saturday reiterated his stance to endorse the candidate of Balochistan for the post of Senate Chairman.
Holding a joint press conference with Chief Minister (CM) Balochistan Mir Abdul Quddus Bizenjo in Islamabad, Khan stated that he would make all out efforts to bar Pakistan Muslim League-Nawaz (PML-N) from fielding its candidate as Senate chairman.
Khan also congratulated Balochistan CM Bizenjo in advance for nominating the candidate of his choice for the post of Senate chairman.
For his part, Bizenjo said that names of Anwarul Haq and Sadiq Sanjrani have been proposed for the Senate’s chairmanship.
He stated that a name of candidate would be finalized soon and PTI would put their weight behind Balochistan panel.
“Balochistan has the opportunity to field their candidate for Senate chairman for the first time in the history of country” Bizenjo said.
All political parties have started consultations and holding meetings for the appointment of Senate’s Chairman as per their choice.