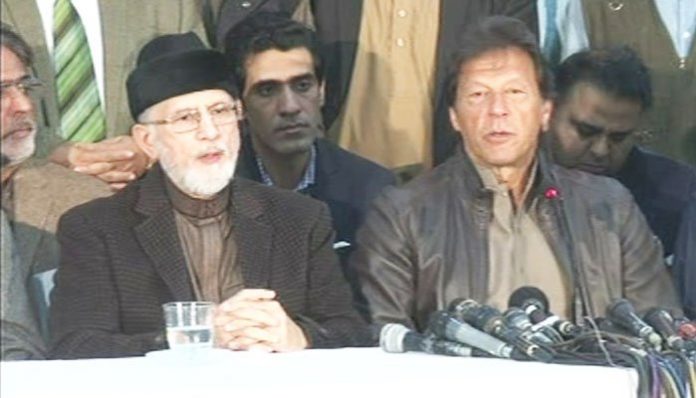 LAHORE: Pakistan Tehreek-e-Insaaf Chairman Imran Khan on Tuesday reiterated his support for Tahirul Qadri and his Pakistan Awami Tehreek (PAT) for pursuing justice in the Model Town case.
The Punjab government, at the behest of the Lahore High Court, made the report for the Model Town incident public on December 5. The report was drafted by Justice Baqir Najfi and termed the 2014 tragedy in Lahore’s Model Town as the “most unfortunate incident” in the country’s history.
“I came here today with my team to reassure PAT and Qadri that our party and the people of Pakistan are with them,” said the PTI chief while addressing a joint press conference alongside the PAT chief.
“Whatever decision PAT takes, PTI will stand alongside it.”
Imran added that the tragedy of Model Town is not only PAT’s issue, but it is an issue for the people of Pakistan.
Criticizing Nawaz, the PTI chief said he was brought to the forefront by a dictator and he is worse than a dictator as “they are a mafia”.
“They tried their best to hide what they did in Model Town.”
Imran further said Nawaz brought to the forefront by a dictator and he is worse than a dictator as “they are a mafia”.
He alleged that state institutions were working for them. “NAB was saving them in the Hudaibiya case while FBR made forged documents for the mafia”.
Imran also alleged that the Punjab Police works on the orders of the Sharif family and are on their “beck and call”.
The PTI chief, referring to the movement announced by the former prime minister, said he is waiting for the movement to start and added that “Nawaz can never start a movement”.
He further claimed that Nawaz is finished and he does not realise the reality yet.
Speaking at the press conference while sitting beside the PTI chief, Qadri welcomed the support by Imran and said the PTI chief has stood by him and has fought the case as his own.
“Imran has jointly struggled with us and has stood by us throughout,” said Qadri.
“The connection between PTI and PAT is very strong and our 2014 sit-in was proof of that,” added the PAT chief.
Referring to the upcoming All Parties Conference called by PAT, Qadri said the future course of action will be announced after the conference.
Qadri, elaborating on the Model Town tragedy, claimed former prime minister Nawaz Sharif also had a part to play in the episode.
“I am sure that the bloodshed could not have happened without Nawaz Sharif’s agreement, orders from Shehbaz Sharif and execution by Rana Sanauulah.”
The PAT chief further claimed that Chief Minister Nawaz Sharif never gave the order to pull back the police forces.
He questioned on whose authority, if not the chief minister’s, could at least 1,000 police “shooters and snipers of the police” could be summoned to the spot.
Qadri also said all limits of injustice were crossed in the Model Town incident. “One brother was sent home on Panama, the other will go due to Model Town.”
He also said that the Army’s help in the matter is not required and they need not step in.
The Model Town incident had claimed lives of at least 14 people and left over 100 others injured during an ‘anti-encroachment operation’ by Punjab Police outside Idara Minhajul Quran in Lahore.