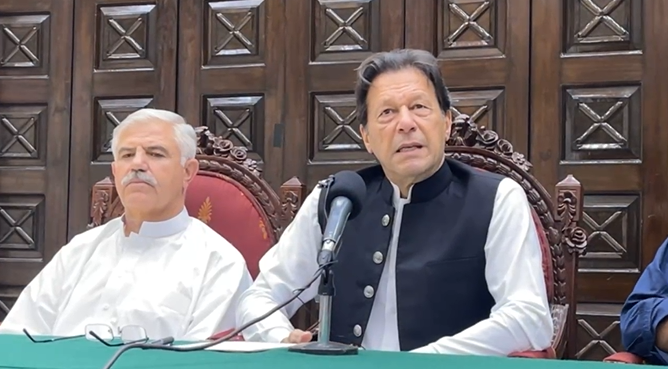 PESHAWAR— Ousted former prime minister Imran Khan on Friday rejected reports that he ended his long march after entering into a deal with the establishment.

Addressing a press conference, Imran Khan said he would return with full preparation if a date for fresh election elections is not announced before the end of his six days ultimatum, expired on May 31.

Justifying his move of calling off long march, Imran Khan that he wrapped up his plans to stage a sit-in to avoid a bloodbath. “Had I sat there that day, there would have been a bloodbath. He also admitted that his party was not well prepared for the march on Islamabad.

Imran Khan said no one should think that he was forced into making that decision, which, he said was meant to avert damage to the country.

However, he also said admitted that his arrival in Islamabad was delayed by barricades and that the PTI was not prepared to deal with the police. Especially, after the Supreme Court of Pakistan issued an order, allowing PTI to hold a rally in Islamabad, it was expecting barricades to be removed, he said.

He also rejected accusations that his protest was aimed at spreading anarchy in the country. “There is propaganda circulating around that we are going to spread anarchy. I want to clarify that no one include women and children in such acts. It was just a peaceful protest that turned into brutality because of a police attack.”

Condemning the clashes between the police and the PTI protesters, he said the federal government did not allow the PTI to hold peaceful protests.

Imran Khan said he would lead another protest if the government did not announce the election date before the end of his six-day deadline.

Khan also said that he had written to Chief Justice of Pakistan Justice Umar Ata Bandial requesting him to clarify if the PTI was allowed to hold protests.

In response to questions, he claimed that the government would be forced to announce an election date in June.

Imran khan denounced the amendment made to election laws on Thursday to reverse legislation his government had enacted earlier on the use of Electronic Voting Machines (EVMs) and granting voting rights to overseas Pakistanis.

He said depriving overseas Pakistanis was an unconstitutional move.

Imran Khan said that he would announce his future line of action at the end of his six-day deadline.

In the press conference, Khan hinted that he was ready to protest for a longer period. “I have decided that the rest of my life is for the real freedom of this nation,” Khan vowed.

Imran Khan also berated the government for increasing petroleum prices and said that it gave in to pressure from the IMF.

He repeated his claims about the prime minister and his cabinet members saying “as far as I know in Western democracy, no one can even think that whoever has the case is the Prime Minister or the Chief Minister. Now if the nation cannot protest against it then what to do?”

Imran Khan said that the police attacked houses of PTI workers in the dark of the night and did not have mercy even on children and women.

Imran Khan said that the PTI had filed a petition before the Supreme Court against police brutality and the court instructed the government to stop police action and remove barricades, but the orders were not followed by the government.

He said the imported government was not a new phenomenon but it had been imposed on the nation for last many years.