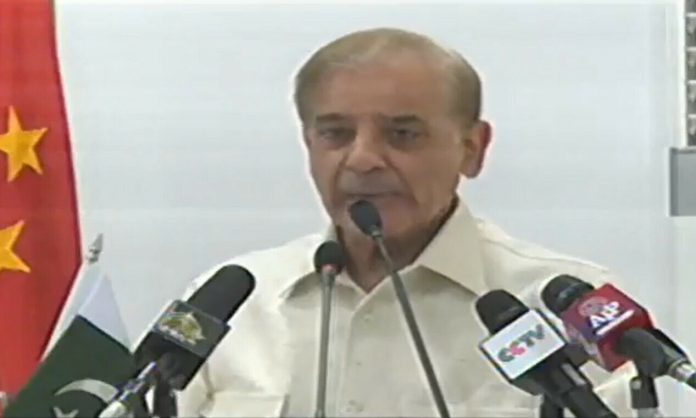 While we try to revive the failing economy of the country, Pakistan Tehreek-e-Insaf is trying to derail the process by staging sit-ins, said Prime Minister Shehbaz Sharif addressing Pakistani and Chinese journalists on Wednesday during his visit to the Karot Hydropower Plant on Jhelum river.

“In September 2014, when we tried to sign a deal related to the Karot Hydropower Project on Jhelum river, Pakistan Tehreek-e-Insaf was staging a sit-in at Islamabad’s D-Chowk, which prevented Chinese President Xi Jingping from visiting,” he said.

The power plant will add 720 MW to the national grid when functional.

“We are grateful to the China Three Gorges Corporation and Chinese authorities that granted our request to offer us free electricity till the commercial operation date is reached. This move alone will save Pakistan’s exchequer Rs 4 billion,” he said and lauded the relationship between Pakistan and China.

Hydropower is clean energy and once all loans are paid off on the project, electricity generated from the power plant will cost Rs 2 or 3, he said.

The prime minister called out his predecessor Imran Khan, saying he had plenty of time but still did not pay any heed to such projects that would have helped the country out of its financial troubles.