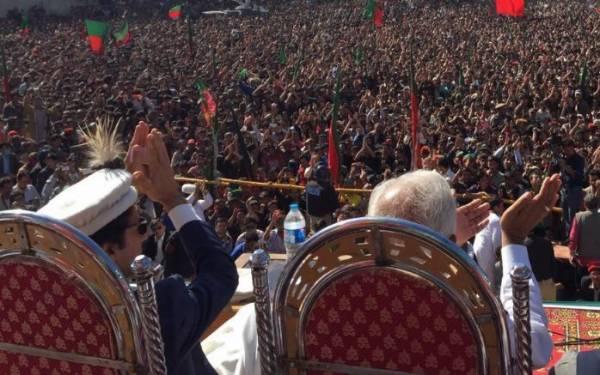 CHILAS: Pakistan Tehrik-e-Insaf (PTI) chief Imran Khan Wednesday vowed to fight cruelty and corruption to eliminate poverty from the country.
He was addressing a rally in connection with general elections in Gilgit-Baltistan being held on June 8. He said that he would show to the people how to fight all kind of atrocities and injustices in the country.
“It is my mission to lift up the lives of 11 crore Pakistanis’ who are living below the poverty line,” the PTI chief said. He said education is the PTI’s top priority and the coalition government in Khyber Pakhtunkhwa has already prioritise education.
Khan said that the PTI’s dream of “Naya Pakistan” was based on the system of justice. He said the incumbent system has spoiled to the limit that the rich get richer while poor get poorer.
The PTI chief once again offered to re-conduct local government elections in Khyber Pakhtunkhwa under army’s supervision over rigging claims.
He asked the people to take money from the PML-N, but vote for the PTI candidate.