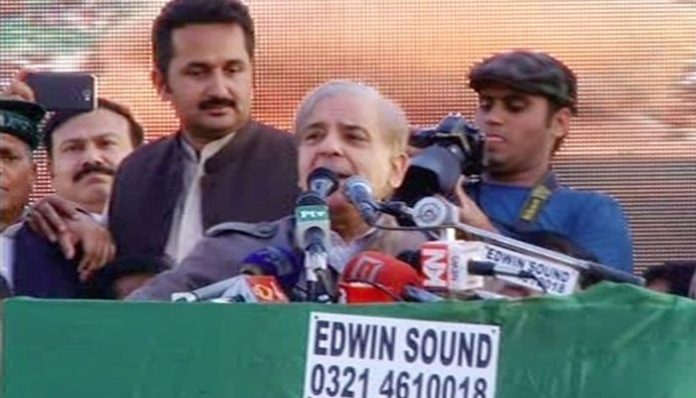 KAMALIA: Pakistan Muslim League-Nawaz (PML-N) president and Punjab Chief Minister Shehbaz Sharif said that Imran Khan’s dharna politics was not just a conspiracy against PML-N, in fact it was a conspiracy against the people.
While addressing the PML-N rally in Kamalia tehsil of Toba Tek Singh, Shehbaz Sharif vowed to put an end to “politics of dharna”, claiming that Imran Khan’s style of politics is a conspiracy against the people of Pakistan.
Shehbaz said Imran Khan’s politics revolves around lies, criticism against institutions and slander.
“We will have to end personal conflicts, false accusations and blame games, if we are to achieve Quaid’s vision of Pakistan,” the acting PML-N president continued.
Highlighting the progress achieved during the past five years under PML-N’s tenure, Shehbaz vowed that load-shedding will be eliminated by the end of the ongoing year.
“Progress achieved during PML-N’s tenure was never witnessed before in Pakistan’s history,” he said, pointing out that before 2013, the public suffered load-shedding extending to 22 hours each day.
“Load-shedding will be eliminated by the end of this year, and it will never return again,” he promised.
Since 2013, when PML-N came to power, it has invested in thousands of megawatts of power, he said.
The minister vowed that if given another chance at government, the party will bring the Metro Bus service to Faisalabad.