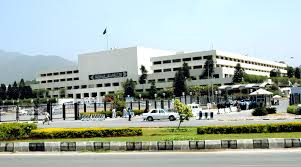 ISLAMABAD: An in-camera session of the National Assembly’s Standing Committee on Defence will be held on Monday (today) to proceed over the amendments in Services Act.

The Secretary of the National Assembly had declared the earlier proceedings of the NA body’s session on Friday as void over failure to follow the rules of the business.

The defence committee of the lower house in its in-camera session at the Parliament House today will follow the due parliamentary process in passage of the amendments bills in services acts, sources said.

The bills would become acts of Parliament after approval from the two houses and signed by the president.

According to sources, the government has decided to follow due parliamentary process to remove any ambiguity surfaced after the bills were passed by the Senate and the National Assembly’s standing committees on defence in a joint session on Friday.