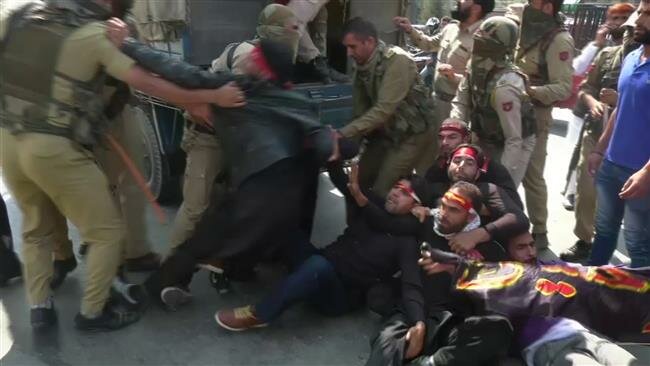 SRINAGAR: India, which has deprived the occupied Kashmir of all its basic rights and freedom, has also banned the Kashmiris to perform their religious obligations to observe Muharram-ul-Haram.
According to Kashmir Media Service, since abrogation of special status of occupied Kashmir on 5th August, the Indian authorities have not allowed Jummah prayers at Srinagar’s historic Jamia Masjid and many other main mosques of the valley, which is under continued clampdown for the past over a month.
Indian government have now announced that no Muharram procession will be allowed in the occupied territory, fearing that these gatherings could turn into anti-India demonstrations.
The administration of occupied Kashmir on Friday said that like previous years, no Muharram procession would be allowed this time too.
It is to mention here that it has been the age-old practice across Kashmir that on 8th and 10th of Muharram, huge processions used to be taken out from different areas of Srinagar and other parts of the valley to pay rich tributes to Hazrat Imam Hussain (RA) – the grandson of Prophet Muhammad (PBUH) – and his companions who were martyred in Karbala. However, the occupation authorities imposed ban on these processions in the territory in 1989.
Meanwhile, the Kashmir valley remains under strict military siege on the 34th consecutive day, today. All markets, schools and colleges are closed while transport is off the road. Internet, mobile, landlines and TV channels in most areas are shut. The valley remains cut off from the rest of the world due to continue blockade and suspension of communication services since 5th August.
The valley represents a humanitarian crisis as the residents are facing severe shortage of essential commodities like baby food and life-saving drugs. Patients are scrambling for medicines while doctors are facing immense difficulties to reach the hospitals.