WASHINGTON: Pakistan’s Ambassador to the United States Aizaz Chaudhry said on Tuesday that India must immediately halt its destabilizing activities from the Afghan soil and desist from perpetuating the conflict in Afghanistan for its own narrow interest. He was responding to a question after delivering a talk on “Peace and Stability in South Asia” at the prestigious think-tank, Carnegie Endowment for International Peace, in Washington DC. Ambassador Chaudhry was invited to speak at the Carnegie by its President and former Deputy Secretary of State William J. Burns. The Ambassador gave an overview of the security situation in the region, including Afghanistan and underlined the need for Pakistan and the United States for working together towards achieving stability in Afghanistan- being a shared objective. Referring to the recent high-level meetings between the two countries, the Ambassador stated that the two countries were closely engaging on a number of important issues including regional peace and stability in South Asia that included bringing about lasting peace in Afghanistan. The Ambassador said that Pakistan values and wishes to further strengthen its long standing relationship with the United States. Tracing 70-year history of the relationship, the Ambassador stated that robust engagement between the two countries had served common interests. He said that Pakistan would continue to strengthen this relationship on the basis of mutual respect and mutuality of interests. Apart from the Government to Government contacts, the Ambassador stated that there were also deep and vibrant people to people contacts between the two countries in the fields of trade, education, art and culture which kept relationship invigorated. Making a case for closer economic relations between the two countries, the Ambassador stated that greater collaboration between Pakistan and the US corporate sectors would generate jobs and prosperity for both countries. The Ambassador also briefed the audience on sustained anti-terror operations by Pakistan’s security forces which had eliminated safe havens of terrorist networks from tribal areas of Pakistan. He said that building on these gains, Pakistan continues to act decisively against remnants of these networks all across the country through operation Radd-ul-Fassad. Ambassador Chaudhry argued that Pakistan’s successes in the fight against terrorism had resulted in an improved internal security environment paving the way for economic upturn in the country. Separately, Ambassador Chaudhry met Senator Cory Gardner (Republican-Colorado) on Capitol Hill on Tuesday as part of his outreach efforts to explain the US lawmakers the ground realities in the South Asian region and highlight Pakistan’s sustained fight against the menace of terrorism and extremism. Senator Gardner serves on the Foreign Relations Committee and is one of the senior most Republican leaders in the Senate. Besides updating the Senator on the latest developments in the context of bilateral relations, Ambassador Chaudhry shared Pakistan’s perspective on the regional situation. He said that Pakistan shared the United States’ desire to see peace in Afghanistan, and believed that only a holistic political process could achieve that outcome. Ambassador Chaudhry highlighted Pakistan’s successes in the fight against terrorism, noting that comprehensive and indiscriminate counterterrorism operations had driven militant groups out of the country. He briefed Senator Gardner, who also deals with commerce issues in the Senate, on the potential for economic cooperation between Pakistan’s rejuvenated business sector and corporate America. The Ambassador reiterated that a broad-based partnership between Pakistan and the United States remains vital to the achievement of their common strategic and regional objectives. Senator Gardner thanked Ambassador Chaudhry for his detailed briefing. He agreed with the Ambassador that a strong Pakistan-U.S. relationship was an important factor for peace and stability in the region. … APP 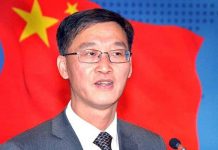