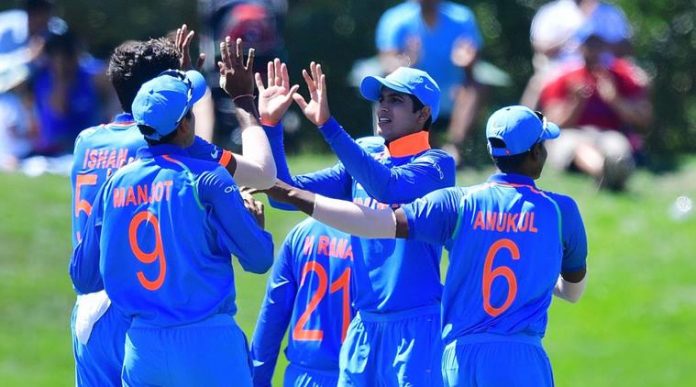 CHRISTCHURCH: India defeated Pakistan by 203 runs to reach the final of the ICC Under-19 Cricket World Cup on Tuesday.
Playing the second semi-final in Christchurch, India chose to bat after winning the toss and determinedly scored run after run despite Pakistani bowlers’ persistent attempt at taking wickets, giving Pakistan a target of 272 runs against a nine-wicket loss.
Pakistan batsmen failed to put up a decent fight and were bowled out for 69 runs after just 21 overs.
Rohail Nazeer remained the highest scorer with 18 runs.
India will now play Australia in the final.
In the given number of overs, India’s Shubman Gill remained ‘not out’ at 102 runs, while Manjot Kalra and Prithvi Shaw scored 47 runs and 41 runs, respectively.
Muhammad Musa sent Shiva Singh off the pitch after the latter had only managed to bag a run.
Arshad Iqbal took three wickets against 51 runs while Musa took four against 67.
Shaheen Afridi, on the other hand, only took one wicket.