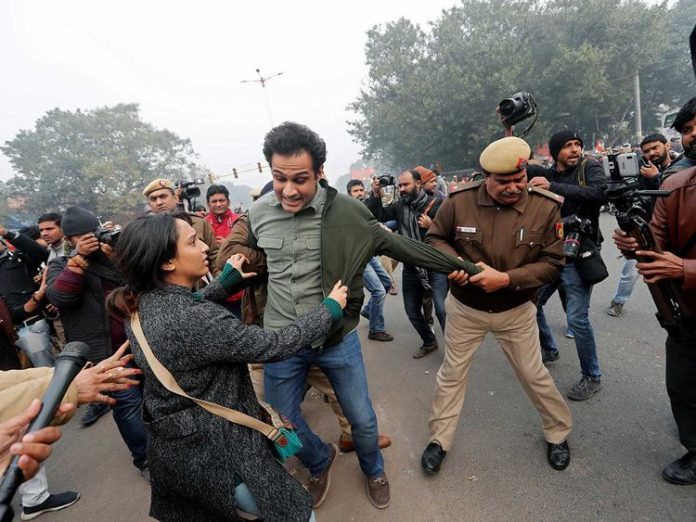 NEW DELHI: Thousands of people joined fresh rallies against a contentious citizenship law in India on Saturday, with 23 killed so far in the unrest.
The death toll jumped after demonstrations turned violent on Friday in the most populous state of Uttar Pradesh, leaving at least 11 dead including an eight-year-old boy, who was trampled.
On Saturday more protests began in cities including Chennai, capital of southern Tamil Nadu state, and Patna in eastern Bihar state. Crowds were also expected again in the national capital New Delhi.
Disquiet has been growing about the law, which was passed by parliament on December 11 and gives people from persecuted minorities from three neighbouring countries an easier path to citizenship — but not if they are Muslim.
Critics say the law discriminates against Muslims and is part of Prime Minister Narendra Modi’s Hindu-nationalist agenda, a claim his political party has denied.
In northern Uttar Pradesh, Muslims make up almost 20 percent of the 200-million population.
The state’s police spokesman Shirish Chandra told foreign news agency that 10 people had died on Friday after being shot. “All of them were bullet fatalities. We are looking into other cases,” he said.
The boy also died on Friday after 2,500 people including children joined a rally in the holy city of Varanasi, district police chief Prabhakar Chaudhary told foreign news agency.
“When the police tried to quell the protests, these persons ran for cover and a stampede-like situation emerged, in which this boy died,” Chaudhary said.
He added that police “exercised complete restraint against the crowds that engaged in attacking them with stones”.
The Times of India said the boy was playing in a lane with a friend when they were trampled by a crowd being chased by police.
The unrest has also seen one other death in Uttar Pradesh and two in the southwestern state of Karnataka, while in Assam state in the northeast — where the wave of protests began last week — six people have been killed and dozens injured.
On Saturday police erected barricades along Jantar Mantar in central Delhi, an avenue that has emerged in recent years as a hotspot for protests.
Authorities have scrambled to contain the situation — imposing emergency laws, blocking internet access, and shutting down shops and restaurants in sensitive pockets across the country.
Police have opened fire during the protests, launched tear gas canisters, charged protesters with batons and detained hundreds of people across the vast nation amid the violence.
But demonstrators have vowed to keep up their fight until the law is revoked.
On Friday evening, street battles broke out in the heart of India’s capital with police firing a water cannon and baton-charging protesters, who chanted anti-Modi slogans and threw stones, at Delhi Gate in the Old Delhi district. …Agencies