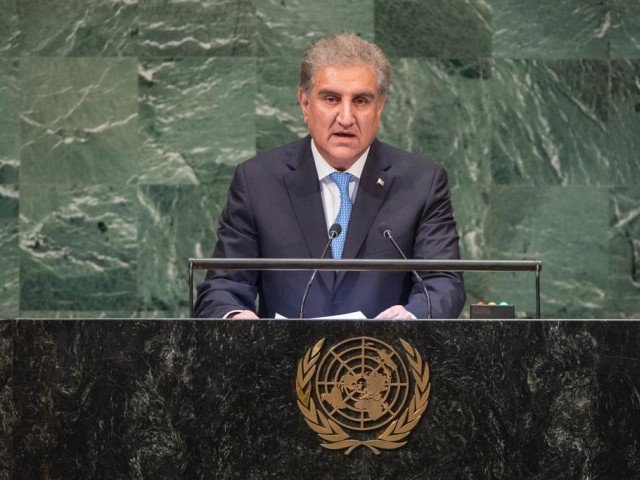 NEW YORK: Foreign Minister Shah Mehmood Qureshi has accused India of financing terror attacks in Pakistan and said the neighbouring country was behind the killings of schoolchildren in Peshawar and a suicide attack in Mastung.
“We have already handed over evidence to the United Nations of Indian involvement in terror attacks in Pakistan,” Qureshi said at the UNGA. “Pakistan will not forget the killings of schoolchildren in Peshawar and the Mastung attack.”
He said that Kulbhushan Jadhav, a commander of the Indian navy, confessed to his involvement in terrorism in Pakistan. “It is a prime example of Indian involvement in terror attacks in Pakistan.”
The minister said that peace could not be restored in South Asia if the Kashmir dispute remains unresolved.
“India violates the ceasefire on the line of control to divert the world’s attention from human rights violations in occupied Kashmir,” Qureshi said.
“We urged the UN to form a commission to investigate human rights violations in occupied Kashmir.”
The foreign minister said that the Modi government lost another opportunity for talks when it canceled a meeting with its foreign minister on the sidelines of the UNGA session.
“Pakistan wants to have a relationship with India based on mutual respect and wants to resolve all the disputes through dialogue,” he added
He warned that India will have to face a befitting response if it attempts to start a limited war with Pakistan.
The minister said that peace could not be brought to Afghanistan through war. “It is now an admitted fact.”
Pakistan supports an Afghan peace process led by the Afghan leadership, he said.
“Pakistan has been fighting terrorism for the past 17 years and we have sacrificed thousands of lives,” he added. “Pakistan has successfully overcome terrorism by launching several operations.”
Qureshi said that a contest of blasphemous caricatures was planned recently and it hurt the sentiments of Muslims around the world.
“We, along with like-minded countries, will continue to confront the hate for Islam,” he added.