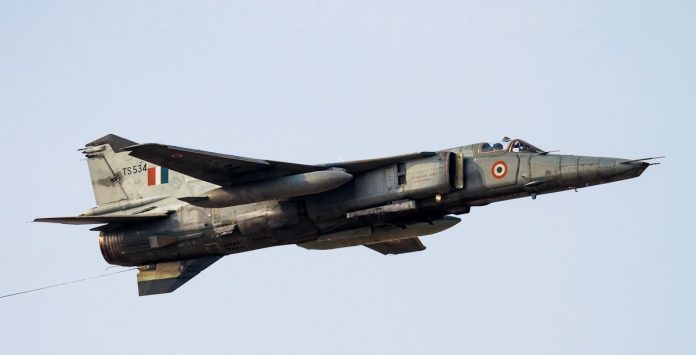 RAJASTHAN: A MiG-27 aircraft of the Indian Air Force (IAF) crashed near Jodhpur in Rajasthan on Sunday, Times of India (TOI) reported quoting officials.
The pilot of the MiG-27 aircraft ejected safely, said TOI, adding that the aircraft was on a routine mission when it crashed. According to the publication, officials cited “engine problems” as the reason for the crash of the “MiG-27 UPG aircraft which got airborne from Utarlai Air Force base”.
Preliminary reports indicate no loss of property or life on the ground, TOI added.
This is the second Indian jet to crash this month; earlier on March 8, the IAF lost a MiG-21 after it crashed while on routine patrol in Rajasthan because of a “bird hit after take off”.
Pakistan had downed two Indian aircraft on Feb 27, at least one of which was a MiG-21 Bison. The loss had triggered Indian Prime Minister Narendra Modi to say the results of the dogfight would have been different if India had inducted Rafale fighter jets into its air force — a comment seen as a veiled swipe at the MiG-21.
An Indian pilot, Wing Commander Abhinandan Varthaman, was arrested by troops and later released by the government as a gesture of peace intended to defuse soaring tensions with New Delhi.
Despite both countries moving to de-escalate the situation, their respective air forces and armies remain operationally deployed.