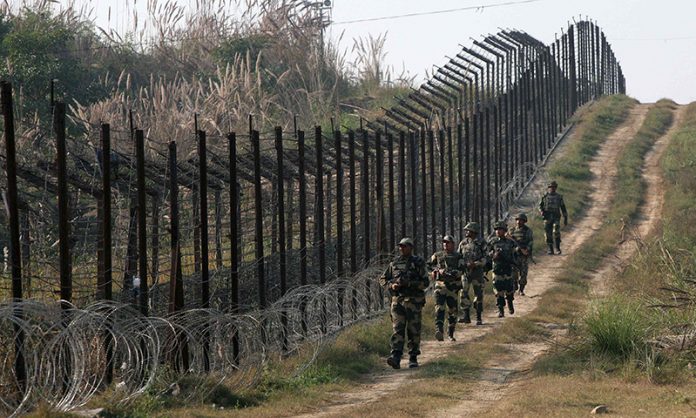 SIALKOT: Indian border security forces once again violated the Line of Control ceasefire and opened unprovoked firing along the border, however no casualties were reported.
Pakistan Rangers befittingly responded, forcing the Indian guns to fall silent. The Indian forces resorted to firing after midnight near Iftikharabad sector.
According to Inter-Services Public Relations (ISPR), however, befitting response from Pakistan army silenced the Indian guns.
In the last few days, India has violated the ceasefire in several sectors along LoC.
On Saturday, Indian border forces opened unprovoked fire targeting civilian population at Chhamb sector of the LoC from 4 am to 8 am.
According to ISPR, Indian border forces also fired mortar shells at the civilian population.
Pakistan and India are at loggerheads as the Narendra Modi-led Indian government accused Pakistan for the attack on Indian military base in Uri sector of the Occupied Kashmir.
The Indian Director General of Military Operations, after the cross border firing, claimed that the country’s forces carried out surgical strikes in Pakistan.
Six Indian soldiers, who were trying to infiltrate into Pakistani territory, were killed by the Pakistani forces on Friday whereas one of the total 15 military men was also captured by the Pakistan Army following the clash.