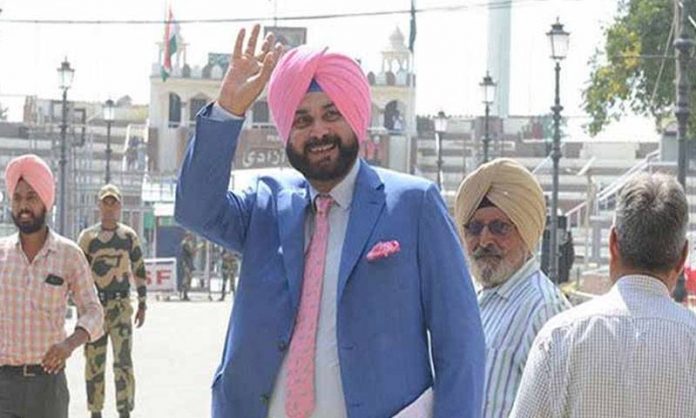 NEW DELHI: The Indian government has finally allowed Navjot Singh Sidhu to attend the inauguration of the Gurdwara Darbar Sahib Kartarpur Corridor, after the cricketer-turned-politician wrote his third letter to the Indian foreign ministry on Thursday requesting permission to visit Pakistan.
Pakistan has already issued a visa to Sidhu after Prime Minister Imran Khan invited him to attend the historic opening of the corridor, which has been built for Indian Sikh pilgrims traveling to the holy Gurdwara Darbar Sahib temple from a visa-free border crossing.
Indian media, quoting official sources, reported on Thursday evening that Sidhu had been given political clearance by the government to take part in the Kartarpur Corridor inauguration ceremony on the Pakistani side.
However, quoting sources, Indian media reported that Sidhu was granted permission only to travel as part of the first group coming from India for the pilgrimage to the Kartarpur Gurdwara, the world’s largest Sikh shrine and the final resting place of Sikhism founder Baba Guru Nanak.
The permission from the Indian government has come through after Sidhu wrote three letters requesting to Indian External Affairs Minister Subrahmanyam Jaishankar asking for the government’s clearance for his visit.
In his third letter, Sidhu pleaded to Jaishankar for a reply, saying he would proceed to Pakistan other Sikh devotees if the minister doesn’t respond.
“Despite repeated reminders you have not responded to whether or not the government has granted me permission to go to Pakistan for inauguration ceremony of Gurdwara Darbar Sahib Kartarpur Corridor. The delay and no response is a hindrance to my future course of action,” the former cricketer wrote in his letter.
“I categorically state that if the government has any inhibitions and say no then, as a law abiding citizen, I will not go. But if you don’t respond to my third letter, then I will proceed to Pakistan as millions of Sikh devotees go on eligible Visa,” he added.
The Times of India tweeted a copy of Sidhu’s letter to Jaishankar.
The historic inauguration of the Kartarpur Corridor is set to take place on Saturday, November 9, just ahead of the 550th birthday of Sikhism founder Baba Guru Nanak on Nov 12.