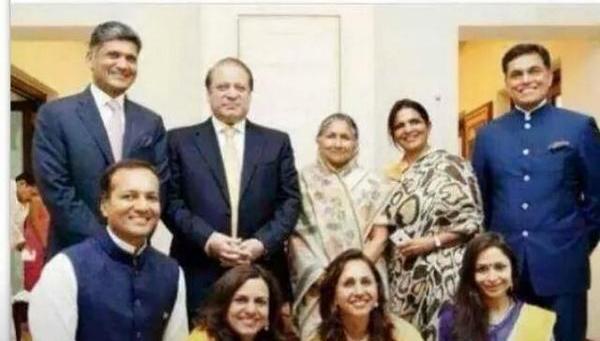 ISLAMABAD: An Indian delegation reportedly called on Prime Minister Nawaz Sharif on Wednesday in an unannounced visit to Pakistan causing disquiet in the opposition benches of Punjab Assembly, demanding agenda and discussion of the meeting to be made public.
Indian steel tycoon Sajjan Jindal was among three Indians who called on the premier in Murree yesterday (Wednesday), media reports said.
The delegation reached Islamabad from Kabul in a special aircraft at 10:00 AM yesterday from where they traveled to Murree by road in three vehicles to meet Prime Minister Nawaz Sharif.
However, no details about the meeting and its agenda have been made public.
Apart of Jindal, the other two visitors to the prime minister have been identified as Suket Singhal and Virander Babar Singh, details relating their ranks and affiliation could not be established.
Various speculations circulating about meeting between the premier and Indian delegation as the news diffused in the media. The delegation have either came with a special message from Indian Prime Minister Narendra Modi for Prime Minister Nawaz Sharif or related to the fate of the convicted Indian spy Kulbhushan Jadhav, analysts say while talking on the visit.
The government sources have yet to give their version of the unscheduled Indian visit.
Separately, the Pakistan Tehreek-e-Insaaf (PTI) lawmaker and opposition leader of Punjab Assembly Mian Mehmood-ul-Rasheed has tabled a resolution in the house by demanding to make the meeting’s agenda and discussion public.
Previously, Sajjan Jindal had reportedly played a key role in arranging a surprised meetings between Prime Minister Nawaz Sharif and Indian counterpart Narendra Modi in Raiwind. The sources further claimed the Jindal had also attended the wedding ceremony of the granddaughter of Prime Minister Nawaz Sharif.