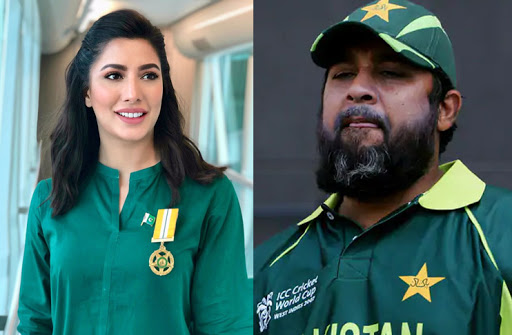 KARACHI: Drama and film actress Mehwish Hayat revealed her all-time favorite Pakistan cricket team’s captain.
Hayat took to Twitter to recall the moment when he had the honor to witness ‘Wall of Fame’ at Gaddafi Stadium during the Pakistan Super League (PSL) season 5. Meanwhile, the actress revealed that his favorite captain was Inzamam-ul-Haq.
It must be noted here that Inzamam had represented Pakistan in 120 Tests, 378 ODIs and only a T20I from 1991 to 2007. He had scored 11739 ODI runs at an average of 39.52 whereas, in Test cricket, he had 8830 runs at an average of 49.60.
Later on after retirement, Inzamam served Pakistan cricket in different capacities. In 2012, he was appointed as batting consultant of the green shirts. He also served as head coach of the Afghanistan cricket team from 2015-2016. He then served as the national team’s chief selector from 2016-19.