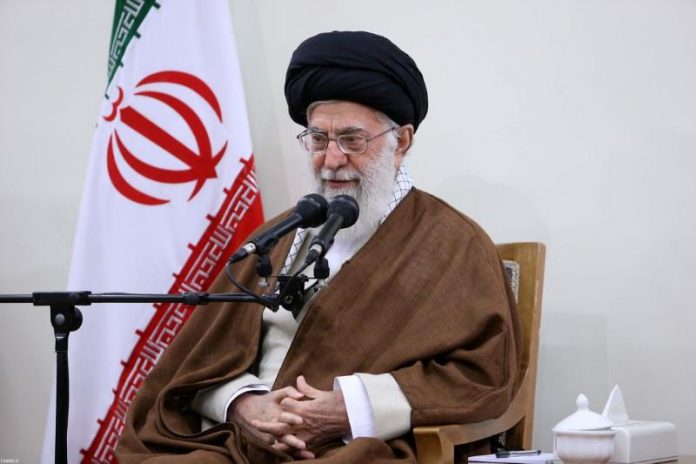 LONDON: Iran’s supreme leader accused the country’s enemies on Tuesday of being behind days of street unrest, as the death toll from anti-government demonstrations rose to 21.
Riot police were out in force in several cities on the sixth day of protests, which spread to the northwestern city of Tabriz, according to social media posts, as security forces scrambled to contain the boldest challenge to Iran’s leadership since 2009.
More than 450 protesters have been arrested in the capital in the last three days, Tehran’s deputy provincial governor said, and hundreds of others were detained around the country. A judicial official said some could face the death penalty.
In the southwestern city of Ahvaz, police fired tear gas to disperse hundreds of demonstrators.
“Police shot tear gas and later went around asking shops on two main streets to close, to completely clear the area,” a resident told Reuters by telephone.
Nine people were killed in Isfahan province during protests on Monday night, including two members of the security forces, state TV said.
Six protesters were killed during an attack on a police station in the town of Qahderijan in that province. The local governor said the protesters were armed.
Supreme leader Ayatollah Ali Khamenei accused Iran’s foes of fomenting the unrest, which began as protests about economic hardship and corruption but have grown into political rallies, some of which have criticized him by name.
“In recent days, enemies of Iran used different tools including cash, weapons, politics and intelligence apparatus to create troubles for the Islamic Republic,” he said, in his first reaction to the unrest.
He did not name the enemies but Ali Shamkhani, secretary of the Supreme National Security Council, said the United States, Britain and Saudi Arabia were behind the riots.
“Saudis will receive Iran’s unexpected response and they know how serious it can be,” Shamkhani was quoted by Tasnim news as saying in an interview with Beirut-based Al Mayadeen TV.
Khamenei said on his website that he would address the nation about the events “when the time is right”.
The United States rejected the suggestion that the protests were the work of foreign powers.
“We all know that’s complete nonsense,” said Nikki Haley, the U.S. ambassador to the United Nations.
“The demonstrations are completely spontaneous. They are virtually in every city in Iran. This is the precise picture of a long oppressed people rising up against their dictators.”
Washington will seek emergency sessions at the United Nations to express support for the protesters, Haley said, adding that the international community had failed to support reformist protests in 2009 that were crushed by Tehran.
“We must not make that mistake again,” she said.
The U.S. State Department urged Tehran to restore access to any social media sites that had been restricted and urged Iranian security forces to exercise restraint.
A U.S. official told Reuters earlier on Tuesday that U.S. intelligence officials think the protests have little chance of toppling the government.
Responding to President Donald Trump’s daily tweets praising the protesters, Iranian Foreign Minister Javad Zarif said Iranians enjoyed the right to peaceful protest that was denied to citizens of U.S. allies in the Middle East.
“These hard-earned rights will be protected, and infiltrators will not be allowed to sabotage them through violence and destruction,” Zarif tweeted.
French President Emmanuel Macron’s office said a planned trip by Foreign Minister Jean-Yves Le Drian to Tehran this week had been postponed. Macron also told Iranian President Hassan Rouhani in a telephone call that Tehran must respect Iranians’ right to free speech and to protest.
Russia, which is allied with Iran in its support for Syrian President Bashar al-Assad, said “unacceptable” external interference was destabilizing the situation in Iran, the RIA news agency reported.
Turkey, which, along with the United States and Saudi Arabia, supports Syrian rebel groups, called for restraint.
“We believe it is necessary to avoid violence and not succumb to provocations,” the Turkish Foreign Ministry said, adding that it hoped foreign intervention would be avoided.
Earlier on Tuesday, Trump had tweeted: “The people of Iran are finally acting against the brutal and corrupt Iranian regime … The people have little food, big inflation and no human rights. The U.S. is watching!”
The head of Tehran’s Revolutionary Court, Musa Ghazanfarabadi, said protesters would be tried soon and the ringleaders could be charged with “moharebeh” — an Islamic term meaning warring against God — which carries the death penalty.
Deputy Interior Minister Hossein Zolfaghari said 90 percent of the detainees were under 25, showing the younger generation’s frustration at economic hardships and lack of social freedoms.
Iran is an OPEC oil producer and regional power deeply involved in Syria and Iraq as part of a battle for influence with rival Saudi Arabia, foreign interventions resented by many Iranians who want their leaders to pour more resources into cutting youth unemployment, which reached 29 percent last year.
President Rouhani, seen as a pragmatist who is at odds with hardliners, deflected criticisms of his economic record.
“People on the streets do not ask for bread and water, but for more freedom,” he said in televised comments on Monday, implying that the protesters were not targeting his government but the more rigid clerical establishment.
Government spokesman Mohammad Baqer Nobakht said both protesters and the security forces should follow the law.
“Even those who are confronting the rioters should act within the framework of law,” he told a news conference.
State television reported that protesters who set ablaze four mosques in villages in Savadkuh County in northern Iran on Monday had been arrested. – Reuters