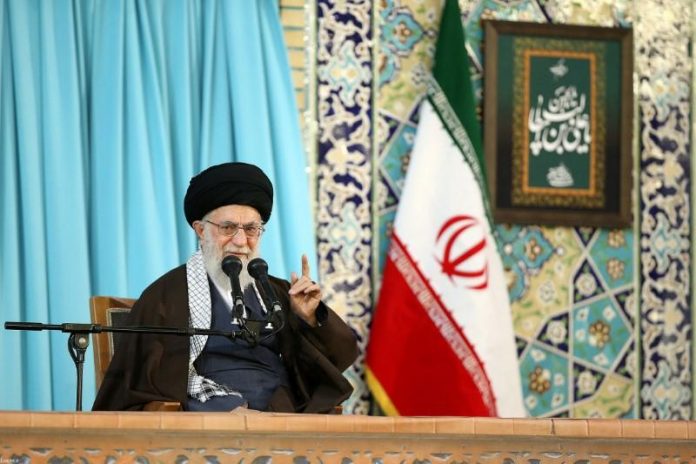 ANKARA: Iran’s Supreme Leader Ayatollah Ali Khamenei said an attack on Syria by the United States, France and Britain on Saturday was a crime and would not achieve any gains.
“Today’s dawn attack on Syria is a crime. I clearly declare that the president of the United States, the president of France and the British prime minister are criminals,” Khamenei said in a speech, according to his Twitter account.
“They will not benefit (from the attack) as they went to Iraq, Syria and Afghanistan in the past years and committed such crimes and did not gain any benefits,” Khamenei said.
Iran – the dominant Shi’ite Muslim power which is in rivalry with Saudi Arabia and the United States’ other Sunni Arab friends – has fought decades of sectarian proxy wars in Syria, Lebanon, Iraq and Yemen.
Iran’s pragmatist President Hassan Rouhani also warned that the U.S.-led missile attack on Syria would lead to further destruction in the Middle East, the semi-official Tasnim news agency reported.
“Such attacks will have no result but more destruction … the Americans want to justify their presence in the region by such attacks,” Rouhani was quoted as saying by Tasnim.
Rouhani signaled that Iran’s support for Syrian President Bashar al-Assad would grow.
“The Syrian nation will continue to resist against foreign aggression …Iran has always helped and will continue to support oppressed nations in the region and around the globe,” Rouhani said.
Iranian Defense Minister Hossein Dehghan said: “The Syrian people will certainly answer these attacks and the people of the world should condemn this aggression,” Fars news agency reported.
An official in Iran’s Revolutionary Guards Corps (IRGC), the Islamic Republic’s most powerful arm, said the fallout from the attacks will be at Washington’s expense.
“With this attack … the situation will become more complex, and this will surely be at the expense of the United States, which will be responsible for the aftermath of upcoming regional events that will certainly not be in their interest,” Yadollah Javani, the Guards’ deputy head for political affairs, told Fars news agency.
“The resistance front will be strengthened and it will have more capacity to act against (U.S.) acts of intervention. Americans should expect the consequences of their actions,” Javani said.
Iran often refers to regional countries and forces opposed to Israel and the United States as a “resistance front”.
“Undoubtedly, the United States and its allies, which took military action against Syria despite the absence of any proven evidence … will assume responsibility for the regional and trans-regional consequences of this adventurism,” Iran’s Foreign Ministry said in a statement carried by state media.
“Iran is opposed to the use of chemical weapons on the basis of religious, legal and ethical standards, while at the same time it … strongly condemns (using this) as an excuse to commit aggression against a sovereign state,” it said.
Iran has been Assad’s most supportive ally against insurgents throughout the conflict. Iran-backed militias helped his army stem rebel advances and, following Russia’s entry into the war in 2015, turn the tide decisively in Assad’s favor.
Analyst Hossein Sheikholeslam, a former Iranian ambassador to Damascus, told state television the attacks would help unite Syrians behind the government.
“These attacks will stabilize the Syrian government… and unite the different tribes in Syria as Syrians become aware of their honor and come to the defense of the independence, territorial integrity and the government of their country,” Sheikholeslam said. – Reuters