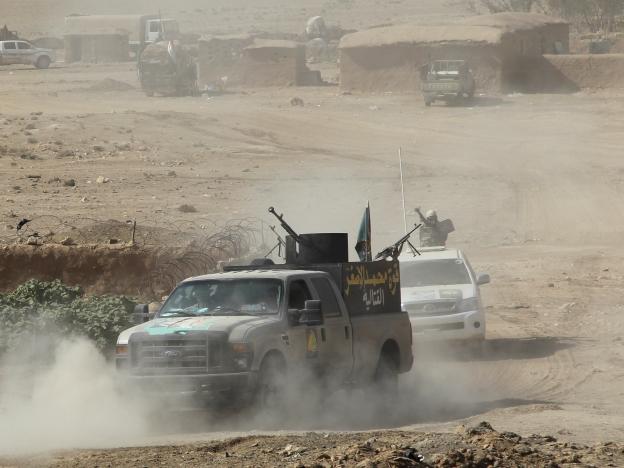 BAGHDAD: Iraqi troops resumed on Monday a coordinated offensive towards Mosul, the last major city held by Daesh, targeting the eastern bank of the Tigris river that divides the city, military officials said.
The army’s counter-terrorism unit had paused its advance last week after it made ground quicker than forces on other fronts, to allow them to close the gap and get nearer to the city.
Iraqi security forces and Kurdish Peshmerga fighters started the offensive on Oct. 17, with air and ground support from the U.S.-led coalition against the hardline group.
Pro-Iranian Iraqi militias joined the fighting on Saturday, aiming to cut the route between Mosul and Raqqa, Daesh’s main stronghold in Syria.
The battle for Mosul, still home to 1.5 million residents, is shaping up to be one of the toughest in a decade of turmoil following the U.S-led invasion that toppled Saddam Hussein in 2003.
“The operation to liberate the left bank of Mosul has started,” said a military statement, referring to the eastern bank of the river that flows from north to south. Another statement said five villages were taken north of Mosul, where Peshmerga fighters are also being deployed.
Daesh militants have been fighting off the two-week offensive with suicide car bombs, snipers and mortar fire.
They have also set oil wells on fire to cover their movements and displaced thousands of civilians from villages toward Mosul, using them as human shields, U.N. officials and villagers who spoke to Reuters have said.
Worst-case United Nations forecasts see up to 1 million people being uprooted by the fighting, which U.N. aid agencies said had so far forced about 17,500 people to flee — a figure that excludes those taken into Mosul by the retreating militants. …Agencies