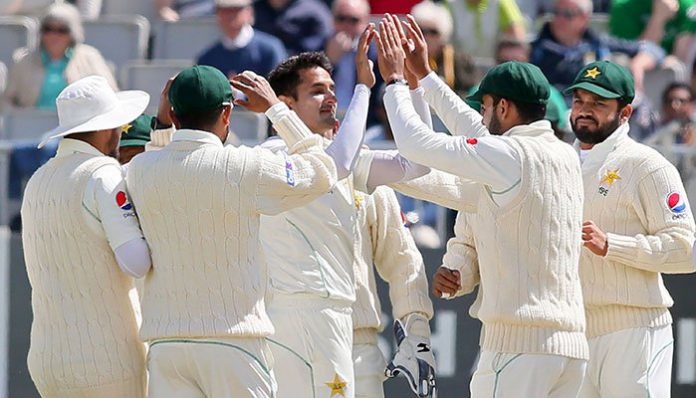 DUBLIN: Ireland collapsed to 61 for seven after lunch on the third day of their inaugural men´s Test at Malahide on Sunday in reply to Pakistan´s first innings 310 for nine declared.
Pakistan captain Sarfraz Ahmed´s well-timed declaration left Ireland with a tricky 30 minutes to bat before lunch and that was long enough for the hosts to lose a trio of top-order batsmen in 6.1 overs.
Veteran opener Ed Joyce was lbw to Mohammad Abbas for four before fellow opener Andrew Balbirnie, who might have been run out for a duck, was lbw to the paceman for nought.
Former England one-day international Joyce, arguably Ireland´s greatest batsman and at 39 the oldest Test debutant since Australia´s Bryce McGain made his bow aged 36 in 2009, appeared to be a victim of the fact the Decision Review System was not being used in this match because Cricket Ireland had decided they could not afford the cost for a one-off game.
But while replays suggested the ball that did for left-hander Joyce may have pitched outside the line, there was little doubt about the delivery that dismissed Balbirnie, who had previously had to scramble back to avoid being run out by Asad Shafiq´s direct hit from short leg.
Then, with what became the last ball before lunch, Ireland captain William Porterfield fell for one when left-arm quick Mohammad Amir uprooted his off-stump.
Abbas then had NJ O’Brien lbwed on duck, and Faheem Ashraf removed Stirling for 17.
Shadab Khan then removed Thompson and Kane in the same over to leave Ireland struggling to survive a follow-on.
Following Friday´s first-day washout, Ireland needed to make a total of 161 — within 150 runs rather than the standard 200 of their opponents´ first innings — to deny Pakistan the chance to enforce the follow-on.
Earlier, Test debutant Faheem Ashraf top-scored for Pakistan with 83 and together with Shadab Khan (55) put on 117 for the seventh wicket.
Middlesex paceman Tim Murtagh led Ireland´s attack with four wickets for 55 runs from 25 overs.
Before play started on another gloriously sunny morning at Malahide following Friday´s first-day total washout, both teams were presented to the President of Ireland, Michael D Higgins.
Pakistan resumed on their overnight 268 for six, with Shadab 52 not out and left-hander Faheem unbeaten on 61.
Ireland were just four overs away from being able to take the new ball when play resumed Sunday and it duly did the trick when, two balls into its deployment, Murtagh had Shadab lbw.
The 19-year-old Shadab was another batsman this match to rue the absence of DRS and he walked off after facing 105 balls, including seven fours.
Faheem responded to the arrival of the new ball, by stylishly driving Murtagh for four, having scored the fastest fifty by a Pakistan Test debutant, off 52 balls, on Saturday.
Faheem, dropped on 36 on Saturday, was missed again in the slips on 62 and 72.
But in sight of the notable feat of a hundred on Test debut, Faheem was caught behind off a lifting delivery from Stuart Thompson, having faced 115 balls, including nine fours and a six.
Earlier Asad Shafiq made 62 as Pakistan recovered from losing two wickets in successive balls to be 13 for two.
Boyd Rankin, the 15th man and the first since Kepler Wessels (Australia and South Africa) 25 years ago to play Test cricket for two nations after making a lone appearance for England, had the honour of taking Ireland´s first Test wicket. …Agencies