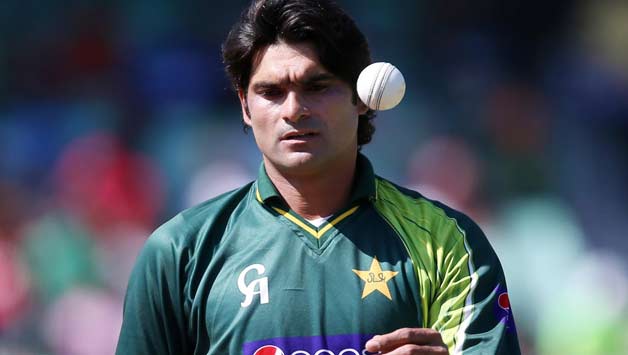 CARDIFF: Pakistan fast bowler Mohammad Irfan has been ruled out of the remainder of the tour of England, the Pakistan Cricket Board announced Saturday.
The giant 7ft 1in (2.1 metres) Irfan, who was himself only called into the squad as an injury replacement for Mohammad Hafeez on August 27, managed just five legitimate overs in Thursday’s fourth one-day international against England at Headingley before going off with cramps to the visible annoyance of coach Mickey Arthur.
Pakistan lost the match by four wickets to go 4-0 down in a five-match series.
But it might have been different had the 34-year-old Irfan, who removed openers Jason Roy and Alex Hales in a return of two for 26 as England slumped to 72 for four, stayed on the field in what was his only match of the tour.
The towering left-armer, who conceded three wides, also received two official warnings from the umpires for running on the pitch.
Fellow paceman Hasan Ali, set to feature in the fifth and final ODI in Cardiff on Sunday, has taken Irfan’s place in the Pakistan squad for the lone Twentyt20 international against England at Manchester’s Old Trafford.
The PCB statement said: “Irfan initially suffered cramps in his hamstring in that match (at Headingley) and came off to receive treatment.
“He returned to play and later on complained about cramps in his left and right calf that prevented him bowling further in the match.
“He will return to Pakistan and will work on his fitness in the National Cricket Academy (in Lahore).”
It added: “The team management has asked to retain Hasan Ali for the T-20I against England on September 7, 2016. The national selection committee has concurred with this request and the Board has agreed to name Hasan Ali in place of Mohammad Irfan for the T20.”
Earlier, Pakistan bowling coach Azhar Mahmood, speaking to reporters in Cardiff on Saturday before Irfan was ruled out of the tour, said: “Definitely Mickey was unhappy (to see Irfan go off) and as bowling coach I was unhappy as well.
“We had a chance to win that game (at Headingley) the other day. If we can get two (more) wickets it will be a different ball game.
“Unfortunately, everyone gets cramp. He is a big guy and his body is totally different to a normal human.” …Agencies