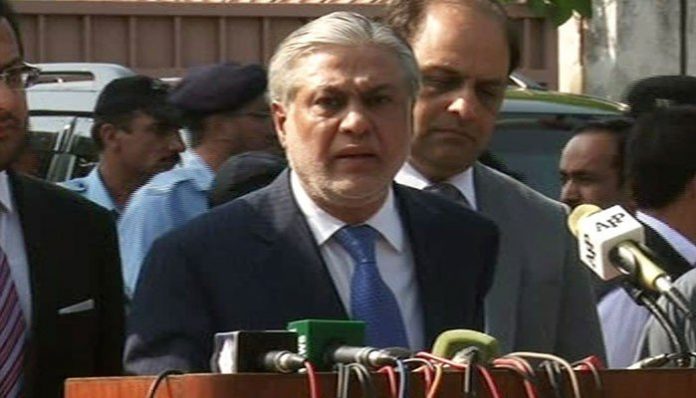 ISLAMABAD: Finance Minister Ishaq Dar has arrived at an accountability court to face trial in a corruption reference against him for having assets beyond his known sources of income.
Judge Muhammad Bashir is expected to record the statements of two more NAB witnesses, including Masoodul Ghani of Habib Bank and Abdul Rehman Gondal of Allied Bank.
The prosecution team of the National Accountability Bureau (NAB) had submitted a list of 28 witnesses against Dar, out of which the depositions of three witnesses have already been recorded.
On Oct 18, the court had adjourned the case without conducting proceeding due to absence of Dar’s lead counsel Khawaja Harris Ahmed.
It had also rejected a request by the finance minister seeking exemption from personal appearance before the court.
Junior lawyer Kauseen Faisal Mufti filed an application, requesting the judge to grant the accused exemption from appearing before the court for he wants to concentrate on his ministerial duties.
According to the NAB reference, the accused had acquired assets and pecuniary interests/ resources in his name or in the name of his dependents of an approximate amount of Rs831.678 million as per the investigation conducted so far.
The assets are disproportionate to his known sources of income for which he could not reasonably account for.
On Oct 20, the accountability court had indicted former prime minister Nawaz Sharif in third reference pertaining to Flagship Investments and other offshore companies.
Sharif and his sons – Hussain and Hassan – have been named in three NAB references, while Maryam and her husband have been nominated only in a reference related to the family’s London flats.
The judge read out charge-sheet against Sharif in presence of his pleader, Zafir Khan, who subsequently pleaded not guilty.
As per the charge-sheet, Nawaz Sharif had served on important posts, including those of Punjab Chief Minister and Prime Minister. Hassan and Hussain were his dependents in 1989 and 1990 and Hassan, who used to look after the assets of his father, submitted a record of the assets from 1990-1995, it added.
The former prime minister remained the chairman of Capital FZE from 2007 till 2014. He told a joint investigation team (JIT), tasked to conduct an investigation into the Panama Papers, that he was a shareholder in fifteen companies.
On Oct 19, the accountability court had indicted the former prime minister in two references related to the Avenfield flats and Al-Azizia Company through his pleader. The charges against his daughter Maryam Nawaz and retired Captain Muhammad Safdar were also framed in their presence in the flats reference.
The Sharif family denied all charges and opted to contest them. After the judge read out charges against Sharif, his pleader read out his statement, denying all charges. Likewise, Maryam and her spouse pleaded not guilty with the former saying, “I wish to declare that I refuse to accept the charge sheet.”
The court adjourned the hearing of the references till Oct 26 when it will began recording the statements of prosecution witnesses.
Three references have been filed against the Sharif family members by National Accountability Bureau (NAB) in compliance with the Supreme Court’s landmark July 28 verdict.