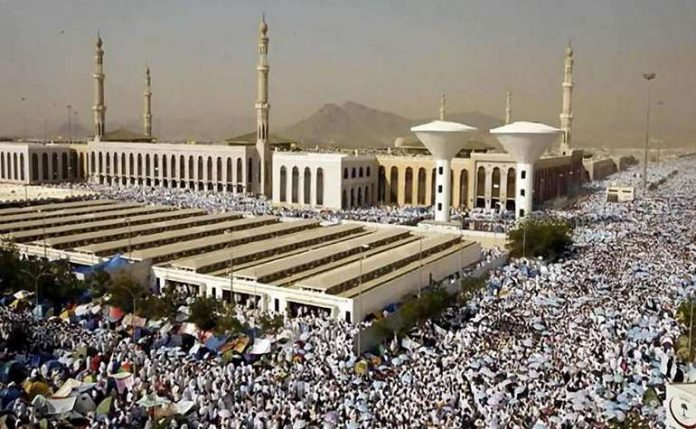 MOUNT ARAFAT: The Hajj sermon delivered at Mount Arafat on Monday emphasised respectful behaviour and good character as the most important lessons of Islam.
More than two million Muslims from around the world scaled the rocky hill southeast of the holy city of Makkah to perform the pinnacle of Hajj. Mount Arafat is where Prophet Mohammed (PBUH) delivered his final sermon.
The imam of Prophet’s (PBUH) Mosque, Sheikh Hussein bin Abdelaziz Al al-Sheikh, delivered the sermon earlier today.
Muslims gather for prayers at Namirah mosque near Mount Arafat, also known as Jabal al-Rahmah (Mount of Mercy), August 20, 2018. Photo: AFP
The pilgrims will perform Zuhr and Asr prayers combined, and spend time in Arafat with prayers for acceptance of their pilgrimage and recitation of Quranic verses until sunset.
After sunset, the pilgrims will head to Muzdalifah, where they will stay until midnight, engaged in prayers after performing Maghreb and Isha prayers combined.
The ritual of changing Ghilaf-e-Kaaba was also held early Monday morning.
The new Ghilaf was prepared at a cost of 200,000 Riyal. It comprises 670kg pure silk, 120kg gold and 100kg silver.
Imam Masjid-ul-Haram Dr Abd ur Rahman Assudais and Governor Makkah Khalid Faisal participated in the ritual.
Every Muslim is required to complete the Hajj journey to Islam’s holiest sites at least once in their lifetime if they are healthy enough and have the means to do so.
Tens of thousands of security personnel have been deployed for the pilgrimage, which was struck by its worst-ever disaster three years ago when around 2,300 worshippers were crushed to death in a stampede.
This year, the Saudis have launched a “smart Hajj” initiative, with apps to help pilgrims with everything from travel plans to medical care.
The interior ministry said on Saturday that the number of pilgrims arriving in Makkah had already surpassed the two million mark, mostly from abroad including large contingents from Egypt, India, Pakistan and Bangladesh.