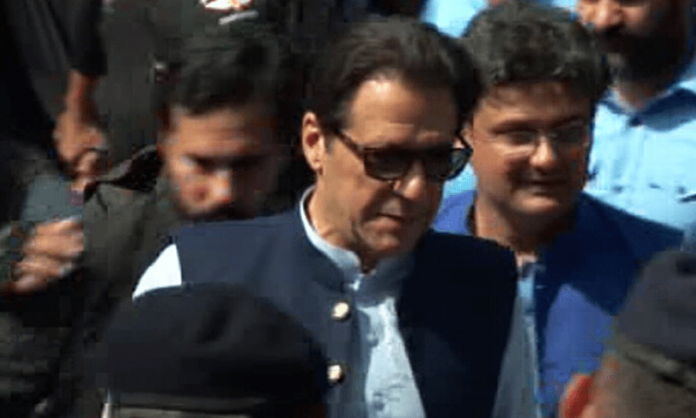 PTI chief Imran Khan would not be facing a terrorism charge – Section 7 (punishment for acts of terrorism) of the Anti-Terrorism Act – in the case registered against him over his remarks against Additional Sessional Judge Zeba Chaudhry and officials of the Islamabad Police during a rally in Islamabad last month.

The former prime minister had threatened to take “legal action” against the inspector general of Islamabad police, his deputy and a female judge of the lower court who had approved PTI leader Shahbaz Gill’s physical remand despite alleged evidence of torture of him.

Subsequently, the IHC summoned Imran in a court of contempt case for the alleged threats and directed PEMRA to submit the record of his speech.

The court in its verdict issued on Monday said that the anti-terrorism charges do not apply in the case.

“we declare that section 7 of the Anti-Terrorism Act, 1997 is not attracted in the light of the principles and law laid down by the august Supreme Court in the case titled “Ghulam Hussain and others v. The State and other” [PLD 2020 SC 61],” the verdict read.

Other charges remain intact and the case will continue on the relevant forum.

“However, the proceedings in relation to offences described under sections 188, 506, 504 and 189 of Pakistan Penal Code, 1860 shall continue in accordance with law and, therefore, the case shall be transferred to a competent court vested with jurisdiction.”

Earlier in the day, Special Prosecutor argued that Imran Khan talked about a judge in his speech.

Chief Justice Athar Minallah, who is hearing the appeal, replied “You should not worry about judges.”

The prosecutor said that the speech was made by a person who has a massive social media following. Many of his followers are uneducated, he said adding that Imran Khan’s speech had put officers in harm’s way.

IHC chief justice asked if Islamabad IG or DIG had filed any complaint. Did he threaten to injure someone in his speech? Justice Minallah added.

The prosecutor replied that the magistrate filed the case. The chief justice remarked that the sections of the anti-terrorism laws are being misused.

Supreme Court has defined the anti-terrorism law, Justice Minallah said. Prima facie, not a single clause of anti-terrorism seems relevant in the case.

You are accepting yourself that you could not find anything besides his speech, CJ Minallah said to the special prosecutor.

It can’t be called a terror design if nothing concrete was found, he added.