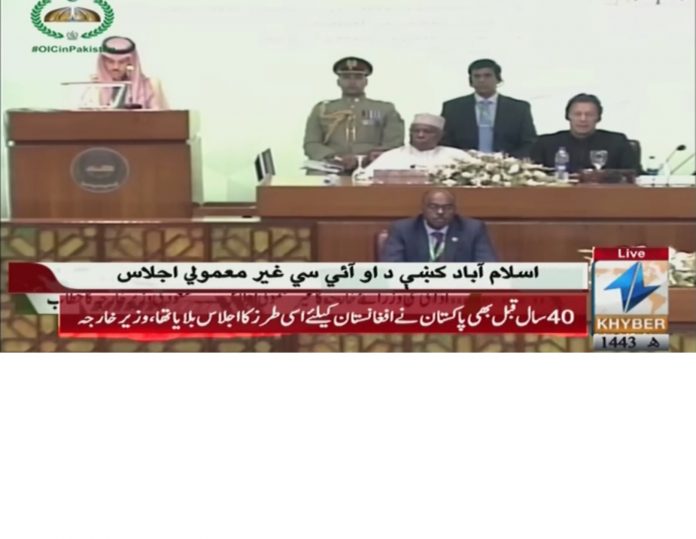 ISLAMABAD: The 17th Extraordinary Session of the Council of Foreign Ministers of Organization of Islamic Cooperation started in Islamabad Sunday at the National Assembly Hall with 20 foreign ministers and 10 deputy foreign ministers in attendance from across the Muslim world.

Convened by Saudi Arabia as OIC chair and being hosted by Pakistan, 70 delegates are participating in the historic session which will discuss the humanitarian situation in Afghanistan. It started with the recitation of verses from the Holy Quran. The session is being chaired by Foreign Minister Shah Mahmood Qureshi.

The extraordinary session of the OIC holds great significance as part of the growing international concern about the humanitarian crisis in Afghanistan and the urgent need to address it.

Besides OIC Members and Observers, the UN system, International Financial Institutions (IFIs), international and regional organizations, and non-OIC members including the P-5, EU, and major countries like Germany and Japan, are among the other invitees.

At the inaugural session, Prime Minister Imran Khan will make a keynote address to highlight the situation and draw world attention towards the deteriorating situation in Afghanistan.

Moreover, the session will also mark the statements on behalf of OIC Regional Groups from Asia, Africa and Arab, as well as President Islamic Development Bank Dr Muhammad Al-Jasser.

The session was convened at the insistence of the Kingdom of Saudi Arabia as the OIC Summit Chair.

Taking to his Twitter handle, PM Khan welcomed the delegation from the OIC member states for coming to Pakistan to attend the crucial OIC meeting. “I welcome delegations from OIC [member] states, observers, friends, partners [and] international organisations to Pakistan,” he said on the microblogging website.

“The extraordinary session of OIC [Council of Foreign Ministers] is an expression of solidarity with the Afghan [people and] to focus our collective energies on addressing the dire humanitarian situation in Afghanistan.”

Earlier, speaking to the media at Parliament House after examining the arrangements, Foreign Minister Shah Mahmood Qureshi said that Pakistan’s stance on the prevailing situation in Afghanistan is gaining recognition with the world joining its voice.