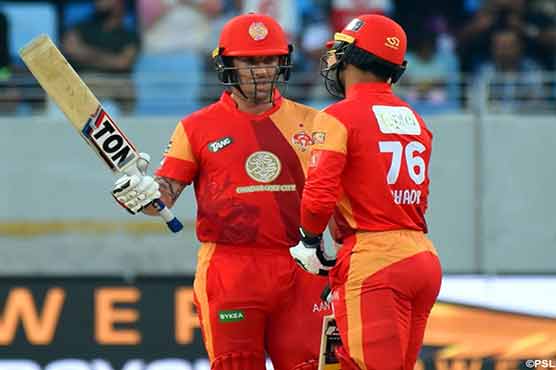 DUBAI: Islamabad United defeated Karachi Kings by eight wickets in the playoff phase of Pakistan Super League at Dubai on Sunday.
Islamabad United achieved the target of 155 runs for loss of two wickets in 12.3 overs.
Batting first, Karachi Kings scored 154 runs for the loss of four wickets in stipulated twenty overs.
The wicketkeeper batsman from New Zealand smashed five towering sixes and twelve superb fours for an unbeaten 94 from just 39 balls.
He made 91 runs for the first wicket with Sahibzada Farhan, who also hit three sixes in his 18-ball 29.
Alex Hales made 14 off 11 balls with two fours and Samit Patel remained not out on 14, scored off just seven balls with three fours.
The United completed their eight-wicket victory in only 12.3 overs.
Earlier, batting first Karachi Kings made 154 runs for four wickets with the help of two aggressive fifties by Joe Denly and Colin Ingram after the team made a disastrous start, losing two wickets for 17.
They were 46 for three when Denly and Ingram got together to score 82 from 57 balls for the fourth wicket stand.
Ingram blasted an unbeaten 68 from just 39 balls, smashing six huge sixes and a four while Denly made 51 off 46 balls with four boundaries and a six.
Among others, Khurram Manzoor (6) and Babar Azam (nought) fell cheaply while stand-in captain Evoin Morgan could make 21.
Fast bowler Mohammad Sami captured two wickets in three balls and finished on two for 20 while Amad Butt and Faheem Ashraf got one wicket each.
Islamabad United made three changes bringing in Sahibzada Farhan for Misbah, Samit Patel for Steve Finn and Mohammad Sami for Gohar while Karachi Kings were unchanged.