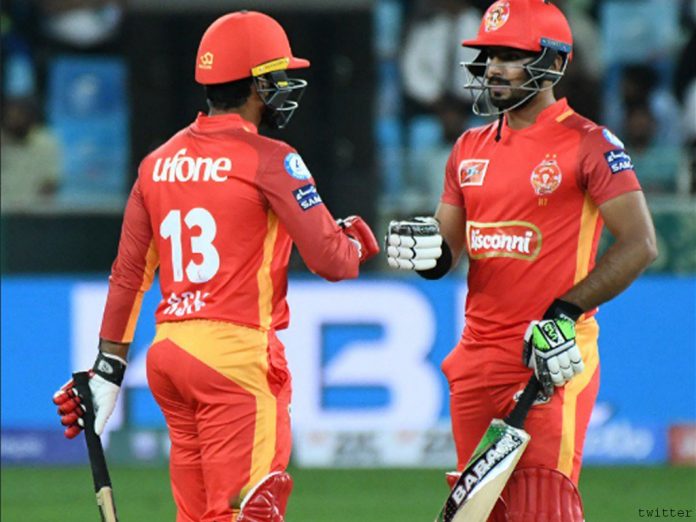 DUBAI: Islamabad United kept their nerves after losing three early wickets in one over from Rahat Ali to register an impressive five-wicket victory over Lahore Qalanders in the opening match of the fourth edition of the Pakistan Super League (PSL-4) at the Dubai International Cricket Stadium on Thursday.
Faheem Ashraf hit a six on the second ball of the 20th over bowled by Lahore Qalanders captain Muhammad Hafeez to seal the match for the defending champions Islamabad United.
Islamabad United innings was rocked by Rahat Ali in the start when he claimed wickets of openers Rizwan Hussain and Luke Ronchi on successive deliveries. Philip Salt denied a hat-trick to Rahat but fell on the last ball of same over.
Rizwan Hussain and Luke Ronchi gave a flying start to Islamabad United added 45 runs for the opening partnership before getting out on two consecutive deliveries. They contributed 15 and 27 runs respectively. Philip Salt scored just four runs.
Delport and Hussain Talat steadied Islamabad United innings and added 55 runs for the stand of fourth wicket before Delport departed after making 24 runs to give Rahat Ali his fourth wicket of the match. Hussain Talat followed soon after contributing 37 runs.
Asif Ali was then joined by Faheem Ashraf when Islamabad United were 118-5 and needed 54 runs for victory in 32 deliveries. The pair hit Lahore Qalanders bowlers to all corners of the ground to guided Islamabad United to victory.
Asif Ali and Faheem Ashraf added 59 runs in their unbroken partnership. Asif Ali remained not our after making 36 runs in just 19 balls, hitting two fours and three sixes. Faheem Ashraf also remained not out and contributed 23 runs in just 11 deliveries with the help of two boundaries and two sixes.
Rahat Ali was the most successful bowler for Lahore Qalanders and claimed four wickets by giving away 29 runs in his quota of four overs. CR Brathwaite chipped in with one wicket.
Earlier, Fakhar Zaman hit a blistering half century as Lahore Qalanders set 172 runs target for Islamabad United in the opening match of the fourth edition of the Pakistan Super League (PSL-4) at the Dubai International cricket stadium on Thursday.
Fakhar Zaman and Sohail Akhtar laid a solid foundation for Lahore Qalanders as the pair added 97 runs in 10.4 overs before Sohail Akhtar gloved a rising delivery from Faheem Ashraf to the safe hands of Luke Ronchi.
Sohail Akhtar made 37 runs. Fakhar Zaman could not capitalize on a solid start and threw away his wicket on a wide delivery from Shadab Khan after scoring 65 runs.
AB de Villiers, making his debut in the Pakistan Super League, stayed on the crease for just 17 deliveries befor he was dismissed by a good catch by Philip Salt on the boundary line on the bowling of Waqas. De Villiers made 24 runs with the help of two boundaries and a huge six.
Lahore Qalanders lost quick wickets in the last five overs in a bid to post a big total but they managed only 171 runs for the loss on eight wickets.
Faheem Ashraf bowled superbly for Islamabad United and took two wickets by giving away just 24 runs in his quota of four overs. Muhammad Sami, Waqas Maqsood, Shadab Khan and CS Delport claimed one wicket each.
Faheem Ashraf was named man of the match for his all-round performance in the match.