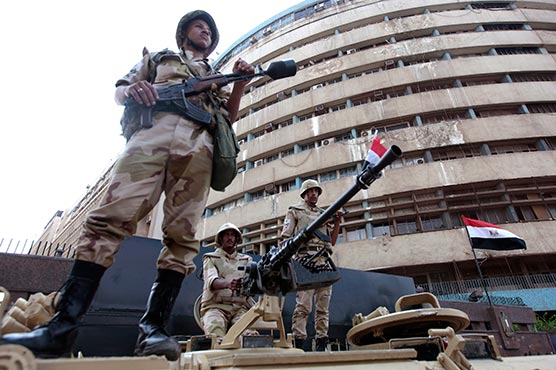 TEL AVIV: Israel worked to overthrow Egypt’s first democratically elected President, Mohamed Morsi, and to orchestrate a coup against him in 2013, Israeli army Brigadier General Aryeh Eldad said.
According to an article published in Maariv newspaper that “the outbreak of the January revolution coincided with the Israeli security assessment that President-elect Mohamed Morsi, a Muslim Brotherhood man, intended to cancel the peace agreement with Israel and send more Egyptian military forces to the Sinai Peninsula.”
“At that stage, Israel was quick and willing to activate its diplomatic tools, and perhaps even greater means, to bring Abdel Fattah Al-Sisi to power in Egypt, and convince the then US administration under President Barack Obama not to oppose this move.”
Eldad stressed that “contrary to all Israeli expectations, the Camp David agreement, which was made 40 years ago, has lasted for many decades despite the lack of real peace between us and the Egyptians, and despite the failure to resolve the Palestinian-Israeli conflict, because this conflict is not just geopolitical. We are rather having a religious war with the Palestinians and Arabs.”
He stated that “the stir caused by Israel’s sale of German submarines to Egypt in conjunction with the commemoration of the 40th anniversary of the Camp David agreement is a new indication that we adhere to having Egypt on our side. And today, 40 years after the Camp David agreement, we reached the conclusion that Israel is fighting shoulder to shoulder.”
Eldad pointed out that “it is too early to talk about the usefulness of the peace agreement with Egypt, 40 years after the signing of the Camp David agreement in 1979, and contrary to the expectations that were issued when it was made, the agreement was able to withstand and continue, but opponents of the withdrawal from Sinai were not wrong then, because we did not have a real peace with Egypt.”
He added that “the Camp David agreement is the first of its kind between Israel and a hostile Arab state, which was then the largest and most dangerous Arab country. It resulted in the withdrawal until the last millimetre according to the international border between Egypt and Israel, knowing that I did not expect that Sadat would fulfil his commitment to the peace agreement with Israel, but I was wrong, too.”