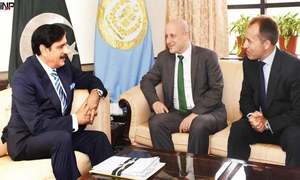 ISLAMABAD: British High Commissioner to Pakistan Thomas Drew met National Security Advisor (NSA) Nasser Khan Janjua on Monday to discuss recent developments in Pak-Afghan relations, read a statement issued by the NSA’s spokesperson on Monday.
The British envoy “briefed the NSA on his recent visit to Afghanistan and the feedback he received from the Afghan leadership, which was quite optimistic despite some terrorist attacks,” the statement read.
Drew went on to suggest that Islamabad should build upon improvements in the Pak-Afghan relationship resulting from Chief of Army Staff (COAS) Gen Qamar Javed Bajwa’s recent visit to Kabul.
“Pakistan and Afghanistan needed to resume and strengthen political, diplomatic, military and intelligence co-operation at all levels,” Janjua was quoted as saying.
The advisor highlighted Pakistan’s commitment towards sustainable peace in Afghanistan through a political settlement.
“All we need is the positivity and confidence of Afghan government and the United States. It is by way of understanding that Pakistan wants to cooperate,” read the statement.
Drew reportedly also said that the United Kingdom was keen to play a constructive role for the stability of the region and to facilitate the Pak-Afghan peace process.