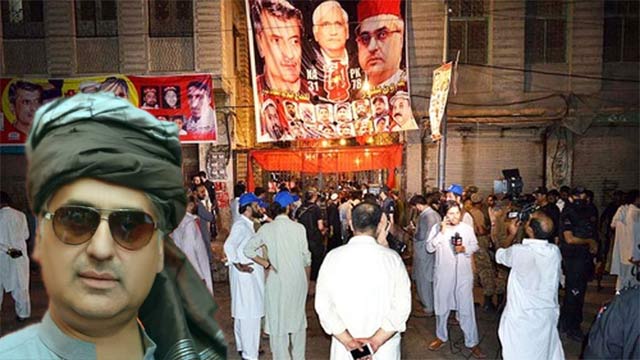 PESHAWAR: A Joint Investigation Team (JIT) was formed on Wednesday to probe Yaka Toot suicide blast in which Haroon Bilour, an Awami National Party (ANP) leader, and 19 other people were martyred and over 60 others were wounded.
As per details, SHO of the area has lodged the First Information Report (FIR) against suicide blast and JIT is formed to initiate investigations.
KP IG Muhammad Tahir reported that JIT comprising seven members and being headed by DIG CTD, has been formed to submit report of the case within a week.
He said the strict security arrangements have been made on all entrances of the city.
The FIR registered against unknown people, has included provisions of anti-terrorism, murder and attempt to murder.
Moreover, nine units of police and CTD have initiated search and strike operations in parts of the city.
SSP operation reported that all the evidences have been gathered from the blast site while dozens of suspects have also been arrested for further investigation.
Earlier, ANP leader Haroon Bilour among 20 was martyred in Peshawar blast last night when a suicide bomber detonated his explosives soon after Haroon Bilour arrived in Yaka Toot area to address a corner meeting of his party.
Bilour was rushed to Lady Reading Hospital, where he succumbed to his wounds.
The funeral prayers of martyred Haroon Bilour will be offered at 5:00pm today (Wednesday) in Peshawar, Dunya News reported. He will be laid to rest at the Wazir Bagh Graveyard.
Haroon Bilour was ANP candidate for the upcoming general elections from provincial assembly constituency PK-78.
Barrister Haroon Bilour was son on Bashir Ahmed Bilour, who was also martyred in suicide attack in Qissa Khawani Bazaar in December 2012, and nephew of another ANP stalwart Ghulam Ahmed Bilour.