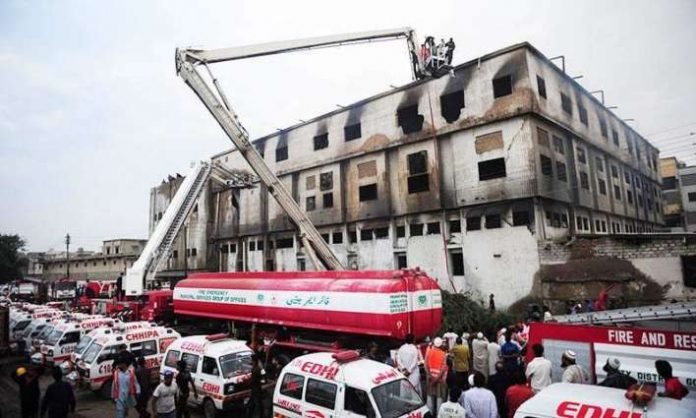 KARACHI: The Joint Investigation Team (JIT) in its conclusive report stated that the Baldia Town factory inferno incident was ‘a terrorism act’, rejecting it as an accident where more than 250 people had been burnt alive on September 11 – 2012 in Karachi.
According to the report of the Joint Investigation Team (JIT) over Baldia Town factory inferno incident which is being declared as one of Pakistan’s worst industrial disasters. The report was signed by officers of law enforcement institutions who have contributed in the investigation of the factory fire case.
The investigators revealed in the 27-page report that the factory had been torched by assailants over non-payment of Rs200 million as extortion money.
The findings showed the irresponsible role of the police forces which seemed to be hiding the real characters involved in the mass killing of the innocent people. The JIT investigators said in the report that the prime characters in the terrorism incident of Baldia Town factory fire should be brought back from the foreign country besides including them in Exit Control List (ECL) and seizure of their passports.
They also sought to provide protection to the witnesses of the incident. It emerged that Hammad Siddiqui and Rehman Bhola was directly involved in the terrorism incident which was previously dealt with a non-professional manner. The JIT members found out that many elements attempted internally and externally influence the investigation process in order to benefit the people behind the carnage.
It is also exposed that a 1000-yard bungalow had been purchased in Hyderabad city by using the extortion money by the assailants before the occurrence of Baldia factory incident.
The First Investigation Report (FIR) of the terrorism act was presented in a way that it was simply a murder incident, said the JIT report, adding the police had failed to carry out the investigation in an impartial way after being pressurised.
In its report, the joint investigation team has demanded to register a new FIR and nominating the prime accused including Rehman Bhola, Hammad Siddiqui, Zubair Charya and others in the case.
Earlier on Saturday, the Sindh government had announced to make JIT reports public including the probe findings against Uzair Baloch, Baldia Town factory inferno and Nisar Morai cases on Monday (tomorrow).